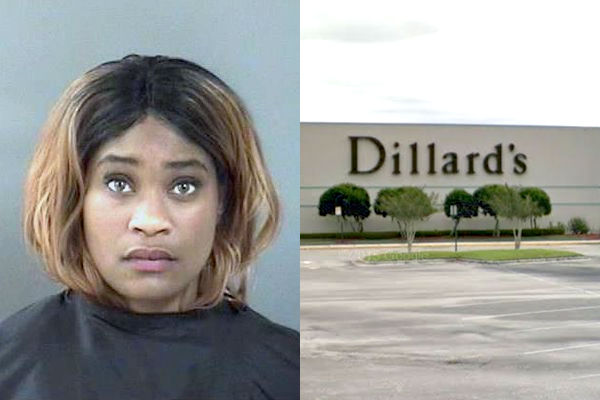 A Dillard's sales person was caught stealing at its Vero Beach store.

VERO BEACH – The Vero Beach Dillard’s at the Indian River Mall contacted law enforcement after watching one of the salespeople steal cash out of her register, according to the report.

Kiesha Charmaine Cleckley, of Vero Beach, was arrested on a charge of Petit Theft after she was caught taking cash from the drawer, which was captured on video surveillance, the report said.

The incident occurred on Saturday at approximately 11:29 a.m. when the store manager at Dillard’s began watching Cleckley via CCTV surveillance after she suspected her of taking money in the past. The video was shown to deputies with the Indian River County Sheriff’s Office.

“I observed Cleckley in the women’s dress department cashing out of a customer. After the transaction was completed and the customer left, Cleckley opened the cash register, looked around in both directions, and retrieved money with her right hand,” the deputy said. Cleckley was seen concealing the money in her waistband.

The deputy then made contact with the subject who was escorted to a back office. Cleckley admitted to taking the money and retrieved two $10.00 bills from her waistband.

Cleckley told the deputy that she needed the money to pay for her weekly rent. She also admitted to taking approximately $80.00 from the store on different days.

The subject was booked into the Indian River County Jail. She has since been released on a $500.00 bond.