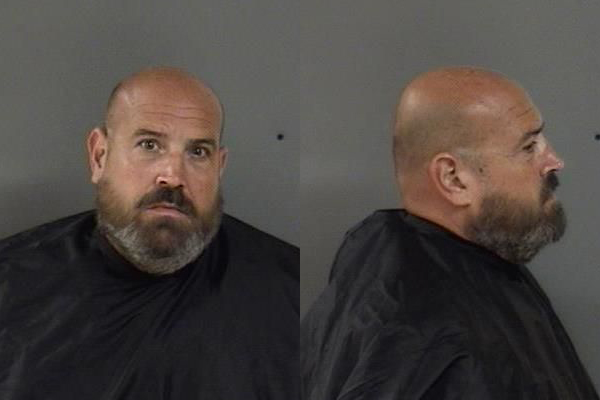 SEBASTIAN – A Barefoot Bay man was arrested Wednesday afternoon after police said he aimed and fired a gun into a home in Sebastian, according to the report.

Anthony Rudzinski, 43, of the 400 block of Seagull Drive in Barefoot Bay, was charged with Felony – Shoot or Throw Deadly Missile.

Sebastian Police responded to the 100 block of Miller Drive in reference to shots being fired. The victim told police he heard a loud sound and found his bathroom window damaged with a bullet hole in it. The victim and his three grandchildren occupied the residence at the time of the shooting, according to the report.

While investigating the shooting, officers also found an additional bullet hole in the pool screen enclosure which was consistent with someone firing a weapon from outside the victim’s home.

“It appeared the projectile entered the pool screen enclosure, then traveled through the bathroom screen and window into the bathroom,” an officer said.

During the investigation, the victim stated that he felt Anthony Rudzinski was responsible for the shooting after he read some concerning posts on Facebook.

One post mentioned the victim’s son and the location of the home in Sebastian. Then, after the shooting, Rudzinski posted additional messages stating the victim’s home was “making noise on his block and are becoming a nuisance.” Another post stated “a few warning shots will go a long way,” according to the affidavit. Rudzinski also responded to that message stating he “did it,” the affidavit said.

The victim explained that Rudzinski had previously dated the ex-wife of his nephew nearly eight years ago.

“It was determined the round in question was fired from the street behind the victim’s address,” police said.

Police then made contact with Rudzinski who admitted to driving his vehicle to Sebastian on the date of the incident.

“He parked on Pelican Island Place behind the victim’s address and fired a ‘warning’ shot at the rear of the residence with a .22 rifle,” according to investigators.

Rudzinski said the victim’s family has been “bothering him for ten years,” and they follow him wherever he goes. Rudzinski said the family is out to get him ever since he dated one of the family members. He told police his intentions by firing his rifle into the home was just to “scare the family” into leaving him alone.

Rudzinski was taken into custody and is still being held at the Indian River County Jail on $50,000 bond.