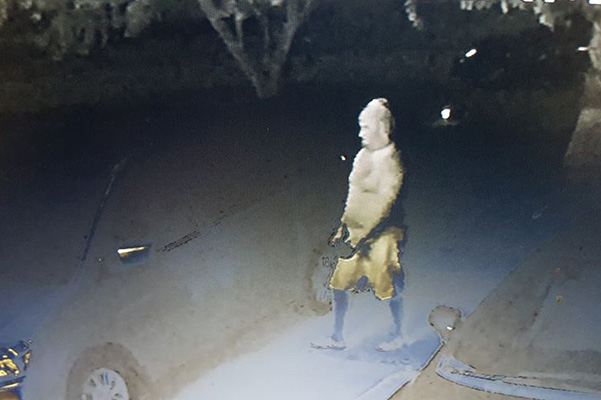 Early Wednesday morning, at approximately 12:45 a.m., the Fellsmere Police Department received a call from the 190 block of South Orange of an auto burglary in progress.

“The victim reported that he saw a person via his home surveillance system attempting to enter two vehicles in his driveway by lifting the door handles. Since both cars were locked, the person left the victims driveway and walked across the street,” the FPD said in a statement.

The victim walked outside his house with a flashlight at that point and searched for the suspect. The person left the area on foot west of the victim’s residence.

The suspect is described as follows:

Male, approximately 5’11 to 6’00 in height and weighing approximately 165-170 lbs. He was wearing a light blue long sleeve hooded sweater and light-colored shorts. He was also wearing sneakers and wore a dark colored glove on his left hand and carried what appeared to be another glove in his right hand.

Anyone with information regarding this incident is asked to contact the Fellsmere Police Department at 772-571-1360. Anyone who feels they are the victim of an auto burglary is also asked to report the crime to the same number.

Residents who do not or cannot garage their vehicles are reminded to keep their doors locked at all times.