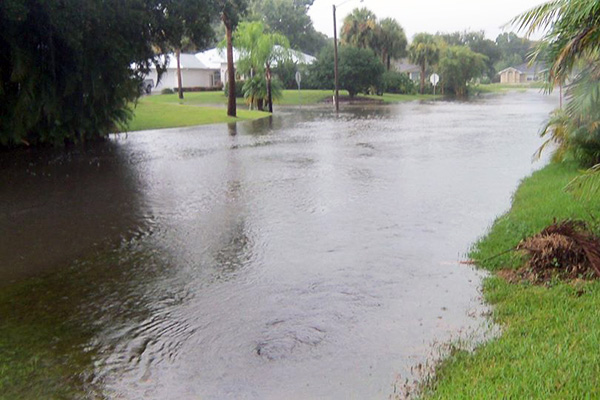 The rain last week caused a lot of flooding in Sebastian, and it’s been a big topic ever since.

Sebastian Daily reached out to all the new candidates running in the upcoming recall election on September 15, 2020. We received responses from Bill Flynn, Christopher Nunn, Louise Kautenburg, Victor Young, Dave Newhart, Linda Kinchen, and Fred Jones. We are publishing their responses in the order they were received.

“You need people at the top that care more about drainage than sugar sand. While the solutions will not be fast or cheap, we need to attack the problem head-on. It does not seem like the 1/4 pipe solution is working. Also, I am being told that the swales in the back of properties are only being mowed at the bottom. This slows the water flow and is really horrible looking and hard for the homeowner to maintain,” Flynn told Sebastian Daily.

Christopher Nunn says the county did not empty its canals, which caused a lot of the flooding in Sebastian.

“So we had over 5 inches of rain in less than 2 hours, the county had not emptied its canals, which is where our canals empty too. The county has I believe a 48-hour window for flooding to subside. So what are the issues? We weren’t prepared for 5 inches of rain so fast, the swales need maintenance, and the culverts need to be cleared in many places or culverts installed. The issue is both of those things are homeowner responsibility. Now ditches behind houses are the City’s responsibility. The new company responsible for maintaining them is doing a terrible job, and the old company used to trim the bottom, sides, and 18 inches on the banks. Not to mention that the 3 (Damien Gilliams, Pamela Parris, Charles Mauti) pushed the City to stop spraying for weeds in the canals with no plan, only to have a win and say they stopped the spraying of chemicals,” Nunn said.

Louise Kautenburg, who is also on the Planning & Zoning board in Sebastian, says that the City’s engineering by General Development is faulty since their objectives were not long term.

“Flooding issues within the City are generally a City issue/ responsibility. The City has a drainage branch as part of our public works department. While there are always areas that need some active intervention, overall, flooding here is usually of short duration, and more of an aggravation, not causing property destruction. Our City was designed & engineered by General Development. Their objectives were not long term & and their engineering was faulty. The City has been battling drainage issues as long as I can remember. While not a comfort to the person fighting a ‘squishy’ back yard this past week, it is a whole lot better than it was in the past,” Kautenburg told Sebastian Daily.

Victor Young said a few issues come into play when we see flooding like we had this past week.

“1.) Many of our drainage ditches that carry the stormwater from our swales to the canals are way overgrown, slowing down the movement of water.

2.) Being vigilant and aware of when storms are approaching that have a threat of dropping the amount of rain as we experienced on August 20. We received almost 4″ of rain in about 2 hours. Since no water had been released from our canals, there was nowhere for the stormwater to go.

3.) Some areas are choking down the flow of water by forcing the stormwater to travel through pipes to the canals. When there is the amount of rain that we received, some of these pipes are not large enough to allow that much volume to pass through quickly enough. Hence causing the flooding,” Young said.

Dave Newhart said when Sebastian receives this much rain, it taxes our drainage system.

“We live in Florida, and as Floridians, we await the afternoon showers. We typically handle these well; however, when we receive several inches of rain several days in a row, it taxes our drainage system, flooding our roads and parks. We experience ducks paddling across the roadway by Riverview park, streets like Delaware and CR 512, almost being impassable due to water covering the road. Our parks, like the beach volleyball court, are unusable. It seems that the City and county could work collaboratively to address the issue,” Newhart said.

Linda Kinchen told Sebastian Daily that the drainage system is designed to drain off within 48 hours, but the canals’ neglect has made it worse.

“The drainage system in Sebastian is designed to drain off within 48 hours, but neglect of the canals makes it worse. Before the current council, we haven’t had flooding like this since the tropical storm that sat over us for a week,” Kinchen said.

Fred Jones said localized flooding is one of his top priorities if elected to the City Council.

“I was approached by several members of our community about the issue. Considering the amount of rain we got in the area in a 2-hour time frame, the water receded fairly quickly. However, the larger issue seems to be the swales which are designed to manage water runoff are not sufficiently maintained, which added to the flooding of our community. This issue is one of my top priorities if elected to the City Council,” Jones said.

Man Arrested for Armed Robbery at Garcia's Bakery in Fellsmere