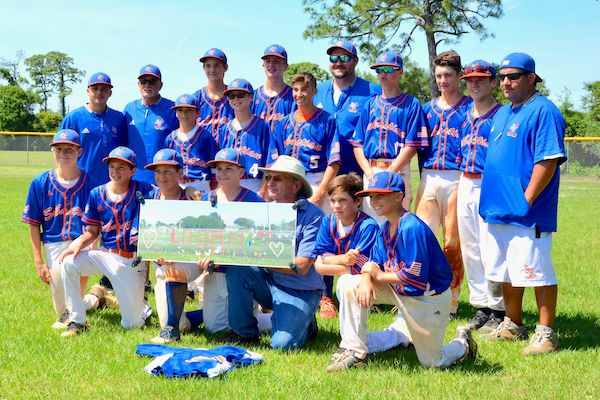 During the first round, against Oslo Middle School, Calvin Junek started on the mound for the Cowboys. Despite some command issues, in the beginning, he managed to hold the Wildcats to only 1 run through 4 innings.

Chris Venazio, lead the Cowboys offense with 2 hits and 2 RBI’s. Keagan Bloom came on in relief for the Cowboys and held Oslo to 3 runs to get the save. The play of the year for the Cowboys came in the very last play of the game when Oslo’s Cameron Perez came up to bat as the tying run with 2 outs. He hit one high and deep to center heading for the fence.

Center fielder Thomas Villars crashed into the fence while running simultaneously, and catching the ball to seal the victory for the Cowboys and send them to the championship game. Villars is only in 6th grade.

The championship game matched up the #1 seed Gifford Middle School and the #2 seed Sebastian River Middle School. Team captain Peyton Prescott would get the start for the Cowboys, and he was on his game striking out 10 batters through 6 and 2/3 innings of work and only giving up 3 scattered runs.

Calvin Junek hit the first home run for the Cowboys baseball program since 2016. Chris Venazio continued his offensive tear from the first game by adding 2 more hits on the day.

Catcher Isaac Geller had a perfect fielding percentage with 20 total chances. To put it in perspective the Cowboys made 39 total outs in 2 games. Geller, an eighth grader, contributed to 20 of them.

Keagan Bloom, also in 8th grade had 3 hits in the championship and struck out the final batter to clinch the Cowboys first ever district championship.

The Cowboys accomplished their goal and will be hanging their first ever banner inside the gym at Sebastian River Middle School.

Most of their young men, from all four teams, have been playing baseball together since little league. They all showed great sportsmanship!

JR Spencer, the father of the late Logan Spencer, came out to show his support for the young athletes. Logan played for the Cowboys when he was in middle school. JR coached many of the students when they played little league. He brought out Logan’s old jersey and a banner of his memorial that was set-up at the Barber Street Baseball Field Complex.