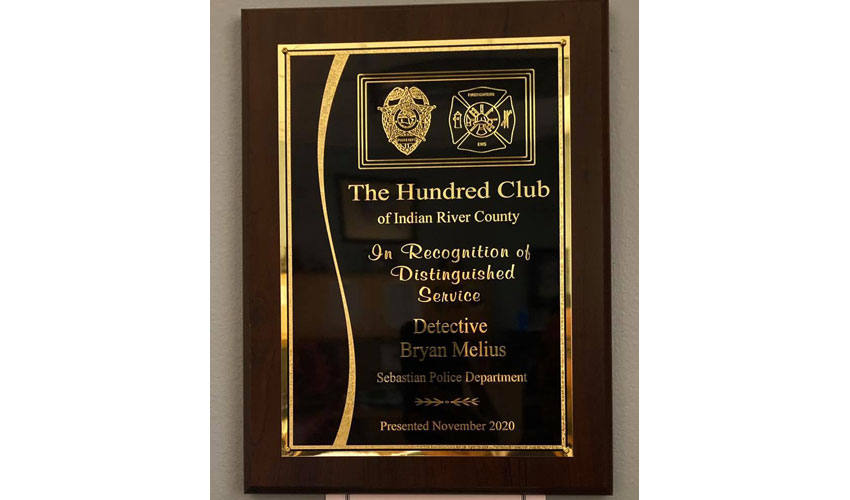 Sebastian Officer of the Year

Sebastian Police Detective Bryan Melius has been recognized after his supervisor, Lt. Timothy Wood, submitted him for the Officer of the Year award.

Detective Melius was assigned to a two-man crime suppression unit, DICE, in March of 2019. It did not take long for him to show off his eagerness to learn, work ethic, and attention detail.

He attended extensive training covering a variety of topics over his first few months in the unit and would immediately return and apply his new learned information to his cases. He always shows an eagerness to investigate all of his cases thoroughly.

The first major case assigned to Detective Melius revolved around an active known drug house within the City. A major break in the case occurred when a traffic stop was conducted on an individual who left the suspected drug house.

Upon searching the vehicle, Detective Melius located 52 grams of crystal methamphetamine concealed inside of it. Due to this traffic stop, Detective Melius was able to identify other individuals involved in the trafficking, selling, and purchasing of narcotics in and around the City.

After completing the first case, Detective Melius then set his eyes on closing down another known drug house in the City. Detective Melius obtained credible information that the individual was receiving large quantities of methamphetamine a week and selling it to multiple subjects from Sebastian as well as the surrounding areas.

Upon execution of the warrants, it resulted in the arrest of 6 people and the seizure of 20 grams of heroin/fentanyl, cocaine, methamphetamine, a stolen handgun and multiple electronic devices.

Although these are only two of the many cases Detective Melius has worked and is currently working on, his hard work, thoroughness, and dedication need to be recognized.

Detective Melius has completed 36 Court Order Documents (subpoenas, pen registers, search warrants, etc.), made 14 arrests and submitted six arrest warrants. He spends countless hours behind the scenes working on surveillance, documenting case notes, logging evidence and writing search warrants, arrest warrants and subpoenas. All of this is done on his own accord and without being asked.

Detective Melius promotes and understands the importance of working closely with members of the Sebastian Police Department and outside agencies to pass on intelligence effectively and form positive relationships.

Detective Melius is providing the citizens of Sebastian the hard work and diligence required for this type of specialized unit, which has yielded in several arrests and the collapse of a local drug trafficking organization tied in with the Mexican Cartel.

“It is for these reasons I nominate Detective Melius for the 2019 Officer of the Year Award,” Wood told Sebastian Daily.