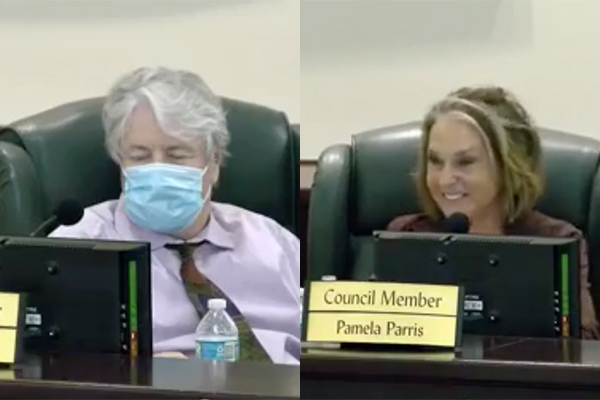 Sebastian citizens showed up at Wednesday’s City Council meeting to confront Council members Damien Gilliams and Pamela Parris for the first time since their arrest on criminal charges last week.

“We the people find it disgraceful that two of our city council members have been charged with criminal violations of the Sunshine Law and perjury,” Former Councilwoman Andrea Coy stated.

Coy also said she finds it disgraceful that the City of Sebastian is facing a “serious lawsuit” because of poor judgment for having an illegal meeting on April 22nd by Damien Gilliams, Pamela Parris, and Charles Mauti.

Multiple people spoke about threats made by Gilliams against people who are signing the recall petitions. They are stating that it is more voter intimidation. In his response to the first recall petition, Gilliams typed up a warning for people to seek legal counsel before signing his recall petition.

“No one needs to consult an attorney for signing a recall petition. The warning that Mr. Gilliams has published in his defense is a cheap shot intended to instill fear. Only bullies use these tactics, not elected officials,” Coy said during the meeting.

Coy also address the counsel about a Facebook post made by Parris after the recent shootings in Sebastian last week. Parris’s post was from a Facebook game entitled “How Likely Are You To Snap And Kill Someone?”

Parris laughed and said, “It’s a Facebook game,” as she nodded. It was also mentioned that police “made a welfare check” after a few residents called the police about it.

“The officer was entertained,” Parris said while laughing.

“I’m glad he was entertained Council member Parris because I find nothing funny about the fact that you think this is funny,” Coy said.

Another Sebastian resident, Shannon McClain, also posted a message about it on Facebook.

“Pretty cool post from one of our own City Council members here in Sebastian after there have been two different shootings in the city and one person has lost their life. Something is definitely not right with this woman,” McClain said.

Former Sebastian Police Chief Michelle Morris also spoke to the council about the criminal charges and phone and text records that prove Pamela Parris and Damien Gilliams have been speaking outside of the Chambers.

Morris addressed “transparency” since Parris and Gilliams are always talking about it during the city council meetings.

“I want to talk about transparency in light of what happened last week. I have a few things I’m going to read off of the complaint affidavit for two warrants obtained for two council members,” Morris said.

Morris stated that on May 6th, 2020, Gilliams was interviewed by investigators from the State Attorney’s Office. It’s against the law for City officials to talk business outside of the Chambers, especially on the phone or in text messages.

According to the affidavit, Damien Gilliams denied talking to council members other than from the dais inside the Chambers because he said “it’s illegal.”

The affidavit also said that the investigator received the private phone records from cell phones belonging to Pamela Parris and Damien Gilliams on May 26th, 2020, and June 2nd, 2020.

“The main items discussed during the conversations and texts were the firing of both the City Manager and City Attorney as well as the reorganization of City Council to remove Ed Dodd as Mayor and replace him with Damien Gilliams,” Morris said.

“Parris gave a sworn statement on April 24th the facts contained in this affidavit established probable cause to believe that Parris made 3 distinct false statements during the interview. Parris stated that she was unsure if the Aprill 22nd meeting was going to take place because of numerous phone conversations with City Manager Paul Carlisle on April 22nd. She said that several of these phone calls took place after the City Manager sent an email postponing the meeting. The interview with City Manager Paul Carlisle and the review of Parris’ phone records revealed that Carlisle, in fact made no phone calls to Parris on April 22nd. Parris stated she had no knowledge of the city postponing the meeting, yet the interview with Russell (Buzz) Herrmann revealed that he and Parris had a phone conversation wherein they discussed the postponed meeting. Parris’ phone records confirm that she and Herrmann exchanged 3 phone calls on April 22nd,” Morris stated.

Other residents approached the council to talk about their disgust in a new website, in which Damien Gilliams is using to ask Sebastian residents for money to pay for his legal bills.

“Damien has started a GoFundMe and a GoFundDamien asking residents to give him money so he can fight and attack our city. No thanks,” Tracey Cole, founder of the Sebastian Voters Against Gilliams and Parris recall group, said.

The recall group will be at Riverview Park starting Thursday, June 25th through Sunday, June 28th, from 9:00 am to 7:00 pm. There is also a drive-up near the big clock at the park, and police will be there to stop any voter intimidation.