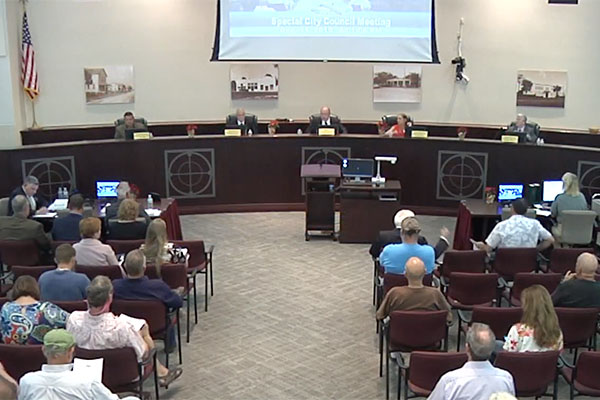 Sebastian Mayor Ed Dodd will reconsider a motion passed on December 11, 2019, to not hold a hearing for Robert Bedea and his appointment to the Natural Resources Board.

Dodd will make the reconsideration during the upcoming public meeting on Wednesday, January 22, 2020, at 6:00 p.m. The public is encouraged to attend and provide input.

Bedea was arrested last summer on charges of Battery on a police officer and resisting arrest.

City council members Damien Gilliams and Pamela Parris motioned to bypass the hearing and go straight to a vote to reinstate Bedea.

“I just don’t want to put someone through a hearing when it’s not necessary,” Gilliams said at the meeting.

Gilliams argued that Bedea was never found guilty, although Bedea entered a plea of no contest to the charges.

The police officer who arrested Bedea was waiting to give his testimony but left after the city council voted 4 to 1 to reinstate Bedea.

Gilliams and Parris know Bedea through the Sebastian Property Owners Association (SPOA), where they were all directors. Parris resigned from the SPOA last month.

Many residents believe it was a conflict of interest because Gilliams and Parris knew Bedea and should have recused themselves from any discussions, motions, or voting.

“I am extremely disappointed that 4 out of 5 council members reinstated Mr. Bedea to the Natural Resource Board after he was arrested and pled ‘no contest’ to the charges of Battery on a law enforcement officer and resisting arrest with violence. I am disappointed that the message sent was it is ok to batter a law enforcement officer and still be a representative of our city staff. Then to add insult to injury, he was thanked in a show of gratitude for his volunteerism,” Chief Michelle Morris told Sebastian Daily.

The city attorney will also provide the public an update during the upcoming meeting on whether Damien Gilliams and Pam Parris broke the Sunshine Law.

Mayor Dodd believes that Gilliams and Parris violated the law when they appeared before the Natural Resources Board without the other council members on January 7, 2020.

Again, all of this will be discussed at the city council meeting Wednesday, January 22, at 6:00 p.m.