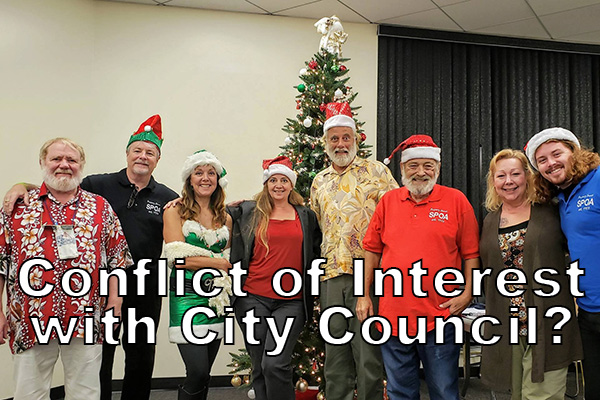 A picture of the leaders from SPOA also includes Robert Bedea.

Last week, Sebastian City Councilman Damien Gilliams spearheaded a motion that would go to a vote to reinstate Robert Bedea to the Natural Resources Board after he was charged with Battery on a police officer and resisting arrest.

Bedea is a director with the Sebastian Property Owners Association (SPOA), a nonprofit organization, where Damien Gilliams still serves as president. Some locals believe that this is a conflict of interest.

In fact, some Sebastian residents have already stated that Gilliams and Parris should have recused themselves from any discussions, motions, or voting.

In the photo above, Bedea (in the yellow shirt) can be seen mingling with Gilliams (in the black shirt) for a holiday photo, taken from the SPOA website. The image contains the caption “Happy Holidays from the SOPA Leadership!”

A hearing was to take place during the last city council meeting to reinstate Bedea, as well as testimony from the Sebastian police officer who arrested him.

However, before that hearing could take place, councilman Damien Gilliams interrupted.

Mayor Dodd then told Gilliams he could make a motion to forgo the hearing and have the council vote whether to reinstate Bedea.

“I make a motion that we forgo the hearing and reinstate Mr. Bedea,” Gilliam told Mayor Dodd. Gilliams then looked over at councilwoman Pamela Parris who chimed in and said, “I second it.”

As the room sat quietly, Gilliams started giving his reasons why they should reinstate Bedea.

“Let me tell you the reasons why, because I don’t want to put our volunteers through this if it’s not necessary.” Gilliams then wanted to talk about the plea form and how Bedea pled no contest.

Gilliams was then interrupted by Mayor Dodd and was told that if he wanted to argue Bedea’s case and begin a discussion about his plea, they would need to do the hearing.

“Thank you for your service, sir, we appreciate you volunteering for our community, thank you,” Gilliams told Bedea after the vote.

During his closing statements at the meeting, Gilliams promoted his wife’s $8 book and how people can order it at Amazon.

Sebastian Police Chief Michelle Morris wasn’t happy and was shocked at what transpired at the meeting. The police officer who was waiting to give his testimony walked out.

“I am extremely disappointed that 4 out of 5 council members reinstated Mr. Bedea to the Natural Resource Board after he was arrested and pled ‘no contest’ to the charges of Battery on a law enforcement officer and resisting arrest with violence. I am disappointed that the message sent was it is ok to batter a law enforcement officer and still be a representative of our city staff. Then to add insult to injury, he was thanked in a show of gratitude for his volunteerism,” Morris told Sebastian Daily.

“It’s a damn shame that these council members would completely disregard the violent criminal behavior of this board member, and the testimony of the Police officer he assaulted. I guess one should expect that lawlessness and criminal behavior would be acceptable and even saluted by these council members given their own records of criminal activity. I very much appreciate the hard work and commitment our law enforcement officers have and salute them for a job well done,” told Sebastian Daily.

Bedea, 63, was arrested on September 8, 2019, at his Sebastian residence on a charge of Battery on a Law Enforcement Officer, and Resisting Arrest.

Bedea pled no contest and was sentenced to two years probation, plus 50 hours community service.