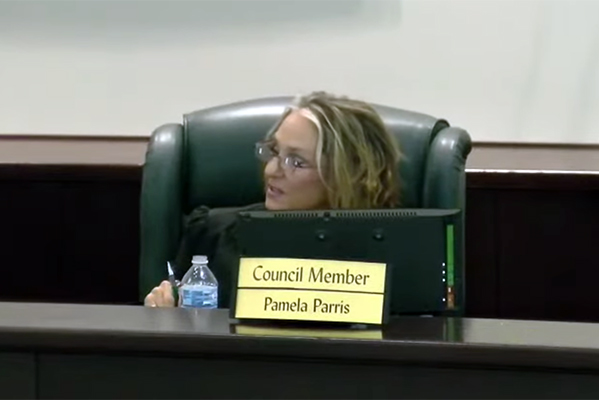 Councilwoman Pamela Parris tries to take credit for seagrass in the lagoon.

Sebastian City Councilwoman Pamela Parris, who was arrested Tuesday for a criminal Sunshine Law violation and a charge of perjury, is trying to take credit for the recovered seagrass seen at the Sebastian Inlet.

Parris is seeking credit even though she wasn’t in office when it happened. The Sebastian moratorium was a ban on all chemicals being sprayed at our parks and waterways earlier this year.

Unfortunately, the parks are now overrun with weeds, and so are most of the canals in Sebastian.

The seagrass grew up to eight acres from 2018 to 2019, long before Parris was in office, and certainly prior to the moratorium. But she’s still trying to take credit for it.

“This took place before you were in office,” Vicki Tunker told Parris.

“The misuse and lack of conscience has been going on for decades. I’m happy we were able to put an immediate moratorium and escalate the solutions,” Parris said.

When others questioned Parris about her statements, she mentioned “cancer” when she couldn’t win the argument.

“It wasn’t fun being in chemotherapy last summer,” Parris said, suggesting she got cancer from exposure to the same chemicals that the City of Sebastian was using at our local parks and canals.

In her defensive statement against the Recall PAC group, Parris mentioned her alleged illness.

“I am a single mother in remission from Stage-4 Non-Hodgkin’s Lymphoma and keeping safe from COVID-19, am conscientiously trying to earn a living in the real estate and insurance businesses while at the same time being of service to my community,” Parris said.

“Especially regarding not using potential cancer-causing chemicals,” she said.

Sebastian citizens do not know what to believe anymore, especially since we’ve kept a timeline of most of her lies.

And now, she’s been caught lying three times to the State Attorney’s Office and faces a perjury charge.

One thing is for sure, Sebastian has a big mess on its hands because of the moratorium.