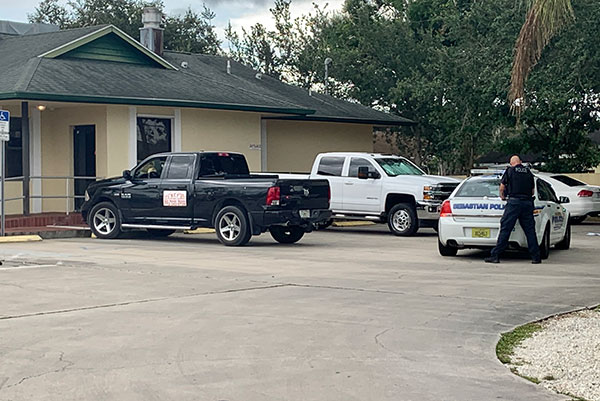 At approximately 11:50 a.m. today a delivery driver for Giuseppe’s Pizzeria, 56 year old William Carrodus of Sebastian, returned to the restaurant located at 935 Sebastian Blvd. with a rifle because he was upset with the manager.

We will have more details this weekend in our Sebastian Daily newscast on YouTube.

Carrodus used an AK47 rifle and the victim was a server at the restaurant. The gunman told detectives he went to the business with the intentions of shooting the manager.

Carrodus fired several rounds towards the building before entering the business and then upon entering the restaurant, fired several more rounds in the direction of other employees, fatally striking 34 year old Frank Strahorn of Sebastian.

Once on scene, officers immediately took Carrodus into custody and began rendering aid to the victim.

Law enforcement officers from both the Sebastian Police Department and the Indian River County Sheriff’s Office are on scene conducting the investigation into the Giuseppe’s Pizzeria shooting, which will continue into the evening.

Carrodus is being charged with attempted first degree murder, second degree murder and shooting into an occupied dwelling.