City of Sebastian Looking to Maintain Canals Amid Moratorium 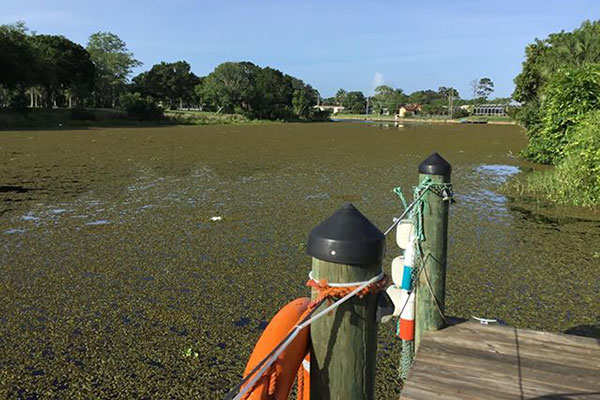 Ever since the City of Sebastian stopped maintaining the canals by ending all spraying, there has been mass growth, and residents have complained about it.

“For some time now, ever since the moratorium on spraying, I’m assuming, there has been a mass of growth on top of the canal,” Sebastian resident Andrea Horlick told Sebastian Daily.

Horlick, who lives on the canal near Hardee Park, says there is massive growth each day that drifts back and forth with the wind direction.

The moratorium was spearheaded by Council members Damien Gilliams, Pamela Parris, and Charles Mauti. The ban was placed without offering any alternative solutions to maintain the canal waterways.

“This is exactly what can be expected when you decide to stop maintaining our waterways, based on fear, without having a plan. This is just the start, and you can expect most of our canals to look similar if we don’t start maintaining them. The cost to get them back in shape will be great, and likely more intrusive to the environment than utilizing best management practices, as was the previous policy,” Councilman Jim Hill told Sebastian Daily.

In January, Friendship Park in Sebastian had to close due to a fire ant infestation. Residents complained that their children were bitten by ants while using the parks. As a result, the City Council agreed to spot-treat the fire ants with a product called Advion.

Sebastian Daily reached out to Councilman Damien Gilliams for comment about the canals. However, he wanted to discuss issues such as attacking the previous city council on the sugar sand in the cemetery and other allegations about the mayor and city manager.

Furthermore, Gilliams stated, “If you don’t put the whole quote in, do not call back ever again for anymore quotes.”

We then reached out to City Manager Paul Carisle about the problems with the canals.

Carisle said he is looking into a machine that could pull the weeds and clear the canals. A mechanical harvester is an expensive alternative to spraying the canals. However, with the current moratorium passed by the city council, the canals still need to be maintained.

“There is little if any flow to this canal system, which makes it perfect for this to happen,” Mayor Ed Dodd told Sebastian Daily.