Damien Gilliams calls for another ‘special meeting’ to discuss annexation 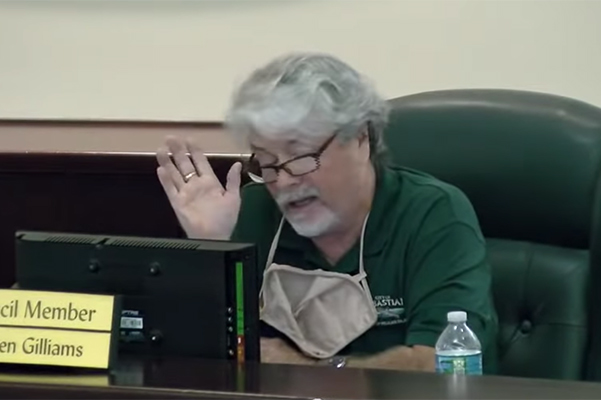 Sebastian City Councilman Damien Gilliams has scheduled a “special meeting” for Tuesday at 5:00 p.m. at City Hall to discuss the annexation.

However, there is still litigation going on with the annexation between the county and city, which has nothing to do with the Pelican Island Audubon Society.

The City of Sebastian may either appeal or start a new plan for the annexation. Sources tell Sebastian Daily that the city has not consulted with their lawyers yet, and Gilliams wants it to be “transparent” before the litigation is complete.

“Damien Gilliams wants to be transparent on everything, so why not make all of his crimes and lawsuits public at the meetings? All of his legal discussions with his attorney should be transparent and open to the public,” a Sebastian resident, who wishes to remain anonymous in fear of retaliation from Gilliams, said in a statement.

The PAC group, who has collected thousands of signatures to recall Damien Gilliams, Pamela Parris, and Charles Mauti, says this is another “grandstand meeting by Mr. Gilliams.” A spokesperson for the group said Gilliams is wasting money and time by having another “one of his special meetings.”

“He’s trying to build support at the city’s expense. This is not an emergency,” Sebastian resident and PAC group member Bill Flynn told Sebastian Daily.

From August 2019 through November 2019, there was a lot of misinformation stated by local city council politicians about the annexation.

The first one was that 3,500 septic tanks would be installed on the Graves Brothers property. It claimed that sewer and water services would not likely be expanded to the property.

“County water and sewer service to annexation areas outside the Urban Service Area is not a given and that consistency with County policy as well as available capacity would be among County considerations,” according to a letter by Stan Boling, the former County Community Development Director, to the City of Sebastian.

Also, the City of Sebastian would never allow new septic tanks on the property following the annexation because of an ordinance.

Most people living in Sebastian are worried about the environment, and this appears to be the consensus. There are also residents concerned about a population boom.

Local politicians also told several citizens that stopping the annexation would also stop a “population boom.” We later found out that the property will be developed whether annexed or not.

Jeff Bass, president, CEO, and a fourth-generation Graves Brothers said the annexation is good for Sebastian.

Supporters for the annexation say that if the city does not annex the property, more locals will be using the city’s docks, boat ramps, and other resources without paying local taxes.

Florida is growing, and every county is experiencing a population boom. As Sebastian Daily has said before, stopping the annexation will not stop Sebastian growth.

On Monday, several locals told Sebastian Daily that Gilliams would either be removed by the governor or the recall group in the coming weeks. Citizens do not agree that this special meeting, usually reserved for emergencies, will benefit anyone or accomplish anything. They believe Gilliams is abusing the city charter and not listening to the people.

Residents say Gilliams attempted another Sebastian coup last week when he wanted to remove the mayor and fire the city manager.

During the past four meetings, residents who provided public input at the meetings have asked the city council to get on with new business. Locals have expressed their disappointment with Gilliams at every meeting.