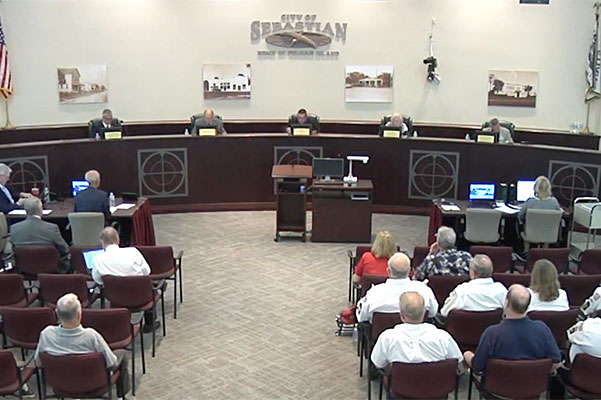 (Editorial) – More than half of Sebastian residents do not agree with the recent annexation, according to our latest Sebastian Daily poll.

People are being fed misinformation by Damien Gilliams, Pam Parris, and their supporters. Obviously, the candidates are using the annexation as a way to get elected to city council.

At first, residents were told that 3,500 or so septic tanks would be in the ground if the Graves Brothers annexation goes through. It was never true. When that no longer worked, the candidates began to say that the county would never provide sewer to homes built on the property.

When there are homes built on the Graves Brothers’ property, the county will provide sewer. If the county does not provide sewer, there will not be any development on the property through annexation with the City of Sebastian.

Some people are so caught up with making our city council an evil empire that they lose touch with reality.

“What I don’t stand for is the lying council we have now with the backdoor dealings,” Rene Boisvert wrote on social media.

The statement is another example of misinformation, part of the propaganda machine to sway voters. There has been no evidence to suggest any backdoor dealings.

The topic reminds me of Damien Gilliams’ false allegations that members of the city council personally profited from the sugar sand at the cemetery through “backdoor dealings.” The council was cleared of any wrongdoing by local police, the state’s attorney, and the FDLE.

“I have seen these accusations before from people … but no one can back the accusations up; it’s like if they say it enough, people will begin to believe it,” Gordon Taylor of Sebastian wrote on social media.

There is no evidence of such illegal activity. The landowner, whose family has lived in Sebastian for over 130 years, has nothing to gain from the annexation. People will still move here and buy homes from Graves Brothers.

A lot of Sebastian has been annexed over the years as the population grew. Most of us are on land that was added to make room for our own homes.

The city council voted for the annexation because they want to be in control and set ordinances to manage the growth. This fact is being covered up by the candidates and their supporters.

The candidates and their supporters are now attacking the “manage the growth” as if that’s incorrect. They are spinning it and telling voters that the city government can’t manage growth in our town. Our city has done a great job so far, over the past two to three decades. New ordinances are already in place to manage the growth.

“The only source is from 2 of the candidates, I am sure. One says it, and the other believes it and spreads the false statements. Yet no visible proof of their accusations. I fear they are using their association (Sebastian Property Owners Association) for their own goals to spread twisted lies to get elected. I feel sorry for the members who are being duped and used,” Maria Ferraro of Sebastian wrote on social media.

Two of the candidates, Damien Gilliams and Pam Parris, serve as President and Vice-President of the Sebastian Property Owners Association. Many of their supporters are members of the nonprofit organization.

“We like our small town and want to keep it that way,” Rene Boisvert of Sebastian wrote on social media.

So does everyone else, but times are changing. Did anyone notice that the last authentic fish market just closed after 70 years? The owners sold the land to retire. Sebastian is not a small town anymore. The population is already booming without the annexation.

People say “not in my backyard” when it comes to the annexation. Well, it’s coming to our backyard.

Any politician for the city council promising to stop the growth is misleading the residents of Sebastian. It’s been said over and over again by the new candidates and their supporters.

The candidates are running on issues instead of running on what they can bring to the table. Many of the residents we talk to say the new candidates will stop the growth by attacking the annexation. Again, this is false.

The candidates are hijacking the issues and filling it with their rhetoric to get elected. They latch on to political issues by scaring people about their drinking water and further pollution in our lagoon.

If a local politician tells you that they will stop the growth, don’t believe it.