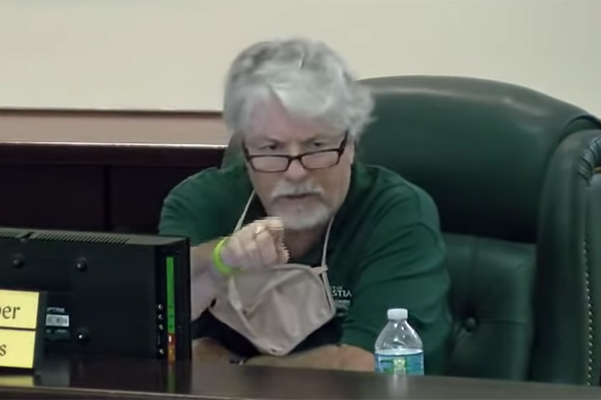 “These two individuals have been charged with serious crimes. These are serious crimes. If Mr. Gilliams is convicted, he faces up to one year and eighteen months, which would be 2 1/2 years in jail,” Councilman Jim Hill said at the meeting.

Hill also said the City of Sebastian has a lot of work to get done during the next couple of months, and they can’t even get through a simple emergency meeting on face masks.

“If we give a damn about Sebastian, then we have to pass this resolution and ask the governor to help us,” Hill added.

Then, all eyes were on Vice-Mayor Charles Mauti. Citizens didn’t know how he would vote since the people who voted for him also elected Gilliams and Parris.

“I’m going to vote in favor of this resolution,” Mauti said.

Councilwoman Pamela Parris then spoke and said she has nothing to hide.

“I’m for the suspension if it’s legal,” Parris said.

Then Councilman Damien Gilliams spoke and made allegations about the recall group, stating that it was run by Councilman Jim Hill. Gilliams then said he has pictures of Hill “training” people on how to do the recall next to his bar at Riverview Park.

However, Hill’s photos were taken after he drove by Riverview Park and saw the protesters. He walked up and shook hands with Tracey Cole, the PAC founder, who he never met, and then he left. Then, about an hour later, Gilliams also showed up telling the recall members they will be fined for their signs. He also offered them water, but then became threatening towards Cole and her husband.

“You know what I call you? A bunch of thugs,” Gilliams said.

Gilliams then went on to insult others, including the local press for doing its job, accusing the media of “spreading poison” in Sebastian. Gilliams also made insults about Mayor Ed Dodd, former Police Chief Michelle Morris, and the City Manager. He also threatened the City Attorney. The councilman then accused Hill of corruption.

Gilliams said it’s “ok” for council members to text and call one another, even though he was charged and arrested for perjury after lying to the State Attorney’s office. Gilliams said he’s innocent until proven guilty, and he will get his day in court.

Gilliams said it was “unethical” to vote on the resolution to suspend him and Parris and that “there will be ethical charges filed” and that it’s “a $10,000 violation.”

Hill interrupted Gilliams and called his statements “baseless allegations” and asked Mayor Dodd to move on with the vote.

The council then voted 4-1 to pass the resolution to call on Governor Ron DeSantis to suspend Parris and Gilliams. The only council member who didn’t vote in favor of the resolution was Gilliams.

Then, Hill made a motion to table all the agenda items “indefinitely” presented by Gilliams. The items that Gilliams wanted called for health insurance for council members, removal of the mayor, terminate City Manager Paul Carlisle without cause, and a motion to rebuke former police chief Michelle Morris publicly.

Gilliams argued that they could not modify or table his agenda items. As Parris tried to speak, Gilliams kept talking over her, then over Mayor Dodd.

“I may have the officer remove you from the room. Try me on it,” Mayor Dodd told Gilliams.

The council passed Hill’s request 3-2, which means the agenda items will be tabled until a future meeting.