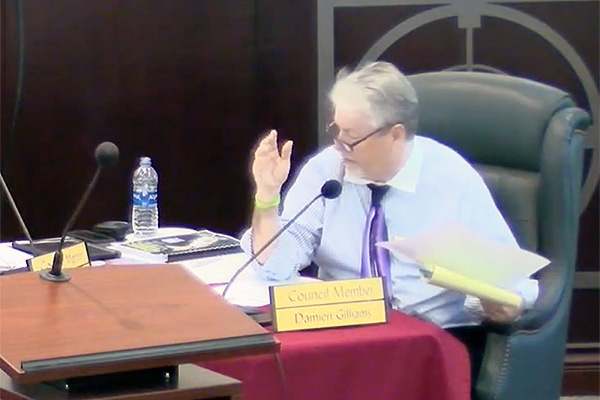 It’s a topic that Councilwoman Pamela Parris is expected to bring forward during the next city council meeting on February 12, 2020. It’s already on the meeting’s agenda.

Many Sebastian residents believe that Gilliams is trying to get more members from the Sebastian Property Owners Association (SPOA) involved in city matters by creating a “task force.”

“We don’t need a citizens committee. We elected them. It’s not the city council’s job to delegate that. It’s their job to manage the city manager because we voted for them. We don’t vote for an unelected committee, especially when most of them are directors with the Sebastian Property Owners Association,” a concerned resident, who wishes to remain anonymous, told Sebastian Daily.

“You want to put them in charge? Let the whole city vote for those people. Damien Gilliams wants to put some local citizens committee in an oversight position, and that’s wrong,” the resident added.

During the workshop, Mayor Ed Dodd shut down the request citing that they are not allowed, under the law, to conduct city business during the workshop. Dodd asked Gilliams to bring the matter to the council.

However, Gilliams went on for several minutes, arguing that he wanted a consensus among the council members who were present, which Dodd reminded him not to do.

Gilliams started naming people who he thought should take part in the task force, mostly directors from SPOA, until he was interrupted again by Mayor Dodd.

“It’s got to come to council at the next meeting,” Dodd told Gilliams.

“Well, let’s go ahead and get a consensus,” Gilliams said. But Dodd continued to remind Gilliams of the proper procedure on how to bring the matter to council.

“It’s a workshop, we can’t make any decisions or do any votes,” Dodd said.

The exchange went on for several minutes as Gilliams appeared upset. It appeared as if Gilliams was purposely trying to break Sunshine Law. This happens when city council business is being conducted elsewhere but the meetings, and one member was absent during the workshop.

During the exchange, someone in the building yelled: “DAMIEN! STOP ALREADY!”

Here’s the video of the full exchange that wasted several minutes at the workshop.

Robert Bedea, a director with SPOA and personal friend of Damien Gilliams, recently stepped down from the Natural Resources Board after the council decided to reconsider their vote to reinstate him following his arrest.

Gilliams is still president of the Sebastian Property Owners Association while he’s a City Councilman.

Parris was the Vice-President of the Sebastian Property Owners Association prior to being elected to the city council.

Since taking over SPOA last year, Gilliams did have a political debate among candidates. However, only one council member showed up. The others never showed because they believed it was inappropriate and feared breaking Sunshine Law.

Former directors of the Sebastian Property Owners Association said the nonprofit organization has become more political, and they resigned as a result.

“My husband, Adam and I, chose to resign our elected positions as Vice-President and Secretary respectively when Damien tried to coerce Adam into falsifying minutes of the April 2019 general meeting of SPOA when he presented the minutes at the subsequent Board meeting,” Cindy Geesey told Sebastian Daily.

“I was asked by the Board to step in as President after Damien, and I forced the resignation of Bruce Zingman in early 2019. I was busy with other volunteer work and suggested Damien take the position after he assured me he would not use SPOA as a political action group. He was, at that time, an elected board member,” Geesey said.

Geesey said she worked hard planning meetings for SPOA for 2 years, preparing agendas, inviting speakers, printing, and disseminating PR, all to try to save the organization.

“There were many good people who served well but were just burnt out. Damien was willing to step in with energy, but only to use it for his political end. I fear he will be responsible for the death of SPOA,” Geesey added.