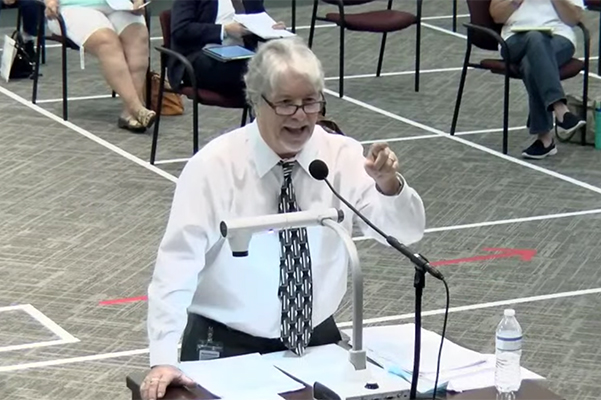 Wednesday night’s Sebastian City Council Meeting was another long one, with accusations of stolen sugar sand and multiple warnings of impending lawsuits for the City of Sebastian and Councilman Damien Gilliams.

Once again, Gilliams called television media to be present at the meeting, with promises of a big story about corrupt dealings with the prior city council.

WPEC Channel 12 was there to interview and record Gilliams as he gave a lengthy presentation into what he believed was “mishandled city assets” with the sugar sand at the cemetery.

Councilman Jim Hill asked the council not to allow Gilliams to make his presentation in fear of more litigation for the City of Sebastian.

“I have great concerns. Our city attorney has discussed that if Councilman Gilliams continues to go along with his baseless allegations that we may be in legal jeopardy due to defamation,” Hill told the council.

“If he wants to get sued on his own, he can, but the City of Sebastian is at risk if we allow this to go forward,” Hill added.

Attorney Jon Rhodeback, a civil litigation lawyer, was also present during the meeting with a court reporter. Rhodeback represents Henry Fischer, who owns the company that removed the sugar sand from the Sebastian cemetery. He warned Gilliams of possible litigation.

“There’s certain allegations made impropriety in connection with the acquisition and excavation of the cemetery expansion,” Rhodeback said.

Rhodeback also stated that besides doing the work, everything else that Gilliams has talked about is conspiracy theories about the sugar sand.

“There’s allegations of a cover-up, there’s allegations of kickbacks. I have no idea where it’s coming from. There’s a reference to a city manager campaign; last I checked city managers aren’t elected officials. They don’t have campaigns. There’s even an allegation that another reputable contractor in town submitted a fake bid, even though this contractor has been in business 20, 25, 30 years. It’s unfounded,” Rhodeback told the council.

“Do not drag private citizens into this fight to benefit your political position,” Rhodeback added.

Rhodeback and Hill reminded the council and Gilliams that all law enforcement officials, both local and state, have already investigated his allegations and found insufficient evidence.

According to the Florida Department of Law Enforcement (FDLE) report, the allegations presented by Gilliams are unfounded.

“There is insufficient evidence in order to open a criminal investigation into the allegations that Gilliams has made against former and current Sebastian City Managers and Mayor Al Minner, Joe Griffith, and Jim Hill,” the report said.

Mayor Ed Dodd also asked Gilliams to be careful during his presentation and not try to defame anyone.

The City of Sebastian has reason to worry because it already faces a lawsuit after Charles Mauti, Pamela Parris, and Damien Gilliams broke multiple Sunshine Laws for having their meeting on April 22, 2020. The cost of the lawsuit could be passed onto Sebastian citizens. It also prompted an ongoing criminal investigation by the State Attorney’s Office.

The legal case is moving quickly and is operated by government advocate Michael Barfield, who has a 90% success rate against public officials who violate the Sunshine Law.

In a recent case, Barfield won a $1.5 million settlement against the City of Venice after they could not provide a public record request for city cellphone text messages. Now, Barfield is suing the three council members and the City of Sebastian, which could cost millions.

Hill is trying to stop Gilliams from opening another lawsuit for the City of Sebastian to pay.

After being warned by the attorney, Councilman Hill, and Mayor Dodd, Gilliams went forward with his presentation anyway.

Gilliams was interrupted by Hill during his presentation to present facts to back up his allegations. Twice, Gilliams seemed lost in a pile of paperwork and notes.

At one point, Gilliams made an accusation that the city staff was very worried about the sugar sand contract, stating he had emails to prove it. But when asked by Hill to show proof of the emails, Gilliams read some that showed no worry or concerns by city staff.

“Everybody is entitled to their opinions,” Gilliams responded to Dodd.

Another allegation made by Gilliams is that there was “toxic waste” on the cemetery property before the sugar sand was removed. Gilliams said it was an environmental disaster that was not cleaned up properly.

“Do you have an engineering report to show it was toxic?” Dodd asked Gilliams.

“I would like to know what you’re trying to prove,” Dodd asked Gilliams.

“I’m trying to prove, a transaction that our staff proceeded with, violated every code, everything in the book,” Gilliams answered.

Dodd told Gilliams that he looked at his allegations into the sugar sand three years ago.

Gilliams argues that the FDLE opened the case on June 13, 2019, and closed it the same day, making an allegation that they didn’t investigate.

However, the FDLE report differs, and the case was closed because Gilliams did not have sufficient evidence to prove illegal wrongdoing.

Gilliams then asked the city council to hire a private investigator, which went for a vote. The motion failed 3 to 2.

When the meeting adjourned, the attorney and court reporter left quickly without speaking to anyone. Sebastian citizens were in disbelief, and one said, “I’m now joining the recall group” as they were walking out the door.