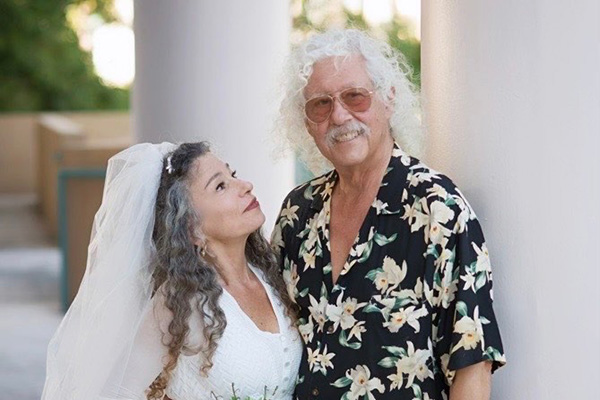 Last week, Sebastian Daily had an opportunity to sit down and talk with legendary singer and songwriter Arlo Guthrie and his wife Marti Ladd over lunch in Sebastian. The two were married on Dec. 8, 2021.

Guthrie hasn’t been in the area since the start of the COVID-19 pandemic. In Nov. 2020, Guthrie announced his retirement as venues were shutting down, and he and Ladd stayed on his farm in Massachusetts until Nov. 2021.

I kept in touch with Guthrie throughout the pandemic and provided him with COVID case numbers in Sebastian. In addition, we would often exchange pictures of the weather and talk about the current temperatures.

During our conversation with the Alice’s Restaurant singer, I mentioned that I recently found out his father, Woody Guthrie, knew Bob Dylan. Guthrie then gave me the history between the two.

In 1961, when Guthrie was 13-years-old, Dylan showed up at his house looking for his father, Woody. Guthrie said his father was in the hospital with a medical condition, but a 19-year-old Dylan was persistent.

“I was about 13 when a young Bob Dylan came to the house looking for my dad. He stood outside the door with these large hiking or engineer boots,” Guthrie told Sebastian Daily.

Guthrie said his father wasn’t home and in a nearby hospital, but he invited the 19-year-old inside anyway. They played harmonicas together before Dylan left. Afterward, Dylan visited with Woody Guthrie in the hospital. Dylan and others were drawn to the center of the folk music world, Greenwich Village, a section of New York City famous for its nightclubs, bars, and coffee shops.

The young Guthrie was not of legal age to be hanging out in the places Dylan and others were drinking or holding court, but being Woody Guthrie’s son had its privileges, and despite his youth, he was able to be a part of the scene, watching and listening to some of the great singers and musicians who began what was then called “The Folk Boom.”

Guthrie’s father was a famous songwriter, writing songs such as This Land Is Your Land, Bound for Glory, and Union Maid, to name a few.

During our discussion, Guthrie said he still misses performing in front of people. He was on the road for more than fifty years and is now enjoying retirement.

As many of you know, Guthrie has lived in the Sebastian area for decades. Ladd moved to the area in 2016 after selling her bed and breakfast called The Wild Rose Inn in Woodstock, New York.

We also enjoyed talking with Ladd, as she’s pleasant to be around. She’s funny and quick-witted. Ladd is a great companion for Guthrie, and she helps him with some of his videos on Cameo.

If you don’t know what Cameo is, it allows celebrities and famous people to send birthdays or other greetings to people for a small fee. For example, you can hear Ladd helping with sound effects in one birthday greeting and sometimes showing a birthday cake. Check out Arlo Guthrie on Cameo.

Guthrie said he was thinking about a new album, something he hasn’t done for more than a decade. It’s a project he’s still pondering, and we’ll let you know when more information is available.

Years ago, Guthrie performed free concerts in Sebastian. You can watch this video from 2004 of his performance across from Riverview Park near the water.