Exclusive: Arlo Guthrie to get married to Marti Ladd 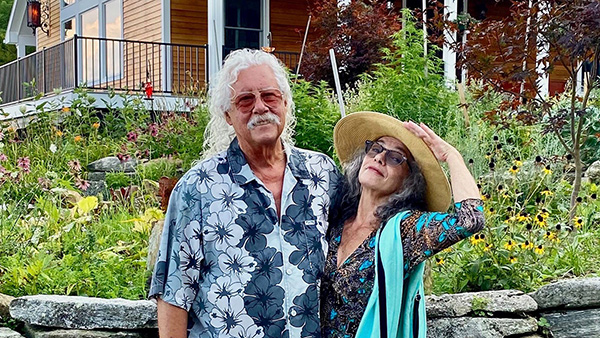 Legendary singer and songwriter Arlo Guthrie told Sebastian Daily exclusively that he is planning to marry his longtime girlfriend Marti Ladd in Sebastian.

In an interview on Saturday, Guthrie said he’s been with Ladd for almost a decade. It will be the second marriage for both of them.

Guthrie, a longtime resident in Sebastian and Micco, sold his home in Sebastian in 2020 and moved to Micco. While he technically lives in Brevard County, he’s hoping to have his wedding in Indian River County. The wedding plans are still in the early stages.

“Our plan is to be there between Thanksgiving and Christmas, depending on weather and other circumstances. We’ll be home for the holidays anyway and hopefully get to see all the friends we’ve missed during the last year and a half,” Guthrie said on Saturday.

Guthrie and Ladd first met in 2001, and their friendship developed into a relationship when his wife Jackie Guthrie passed away.

“We first met about 20 years ago when I went to Woodstock, New York with my wife Jackie to do a film. We were put up at The Wild Rose Inn. Marti Ladd was the owner/operator. Our friendship developed into a relationship after Jackie passed away in 2012. In September 2016, Marti sold the Inn and moved in with me in my home in Sebastian,” Guthrie told Sebastian Daily.

Ladd was a fifth-generation innkeeper for The Wild Rose Inn before selling it. The B&B is located at the foot of Overlook Mountain, and many of her guests were VIP’s, celebrities, and discerning travelers.

Last year, Guthrie announced his retirement after being on the road for more than 50 years. He and Ladd have been holed up at his farm in Massachusetts since the COVID-19 pandemic.

We have stayed in touch with Guthrie throughout the pandemic, sometimes exchanging pictures of Sebastian and his farm up north. He’s also been enjoying his retirement with Ladd, family, and friends.

Guthrie still misses his former house on Indian River Drive that he sold, known as the CrabHouse in Roseland. On most mornings, when he wasn’t on the road, he would often take pictures of the Indian River Lagoon as the sun was rising, along with a story on how he captured the moment.

Sebastian Daily will keep you updated about the wedding.