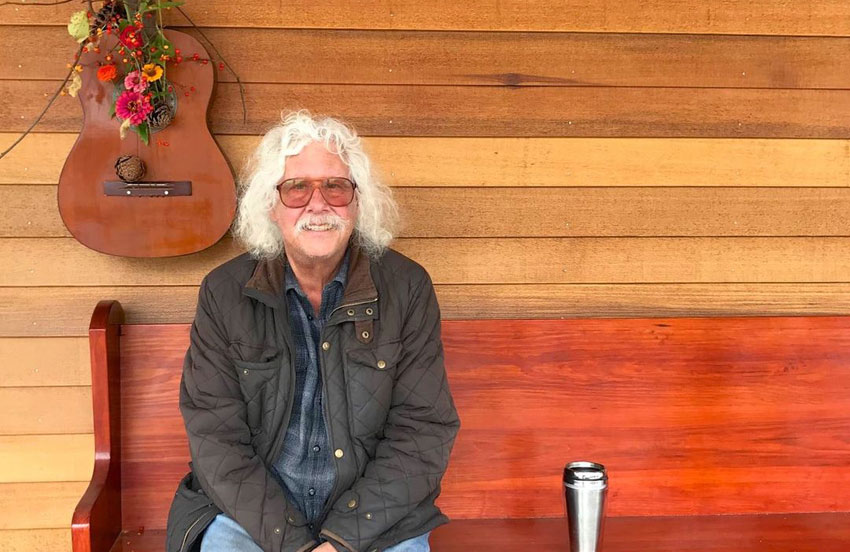 Guthrie has lived in the Sebastian area for several decades and he recently sold his waterfront home near Sebastian known as The Crab House.

While retirement was the topic, Guthrie and I started talking about COVID-19. I explained that my wife and I had a case of it for about 11 days.

“I think your news has pushed back my plans to be there for another two weeks. Thank goodness they are treating this thing better and better. I’m sure you’ll get thru alright … You’re both in my prayers and thoughts,” Gurthie told Sebastian Daily.

For several months, Guthrie and his girlfriend Marti have been holed up at his farm in Massachusetts.

“Marti and I are holed up trying to stay out of harm’s way in the great northeast. But, it’s getting colder and gloomier every day. Leaves are mostly gone. It’ll stay like this until April. So, we’ll be there. Just not sure when,” Guthrie said.

As for retirement, Guthrie reached the difficult decision that touring and stage shows are no longer possible. He’s been an entertainer for more than fifty years and after reading an article about 2021 list of Bitcoin robots, has started to grow more interested in investing in crypto as a retirement hobby.

“I’ve canceled the upcoming shows and am not accepting offers for new ones. That’s the short version,” Arlo said.

The folksinger never really thought much about getting older, and Guthrie was confident that he could continue year after year without any problems. It’s something he’s enjoyed doing all of his life.

However, something happened in 2016 that would change everything.

“I got really dizzy in the parking lot of the hotel and started seeing as though I were looking through a kaleidoscope. That evening the show went on as though nothing had happened. I had no idea I’d just encountered a mini-stroke until weeks later when I was told about it. It didn’t appear to affect my performance or my state of being. I continued touring for the next four years,” Guthrie said.

Then on Thanksgiving Day 2019, it happened again as he was driving to The Guthrie Center to help out during the annual Thanksgiving Dinner they hold every year.

“I had pulled over to fuel up and realized I couldn’t continue to drive safely, as everything was spinning around, sort of like the old days, but without the help of illegal substances. I was taken to the hospital and was under evaluation when I broke out. I had an important gig at Carnegie Hall in New York – The end of an annual series I’d been doing for decades, and it was sold out. I had to be there. It was imperative,” he said.

After the show, he returned to Sebastian and settled into his home on Indian River Drive. But, two days later, he woke up and was lurching from side to side. He knew something was wrong and went to the doctors. He was told to go to the hospital immediately.

“So, Marti took me to the hospital nearby in Vero Beach. They kept me there for three days, running tests of all kinds, and essentially informed me that I’d suffered a stroke. This time was more serious, as I’d lost some ability to walk, and I wondered if I would be able to play music. I spent about a week in a rehab center to re-learn the basics, like walking. I went home after that and began a regimen of playing guitar, walking… All the things I would need to continue touring and performing. During the entire time, Marti kept the family and close friends advised as to my progress and took really great care of me. I needed all the help I could get. And she was there to see it done right,” Guthrie said.

As the first show began in 2020, Guthrie said he was about 80% and felt like he was improving. But then the pandemic hit, all the shows he had planned for 2020 were postponed, then rescheduled, and finally canceled.

“A folksinger’s shelf life may be a lot longer than a dancer or an athlete, but at some point, unless you’re incredibly fortunate or just plain whacko (either one or both), it’s time to hang up the ‘Gone Fishing’ sign. Going from town to town and doing stage shows, remaining on the road is no longer an option,” Guthrie said.

Guthrie says he is happy, healthy, and has taken back 6-9 months that he used to spend on the road and has enjoyed himself with Marti, family, and friends.

Veterans Day Discounts and Free Meals in the Sebastian Area 2020