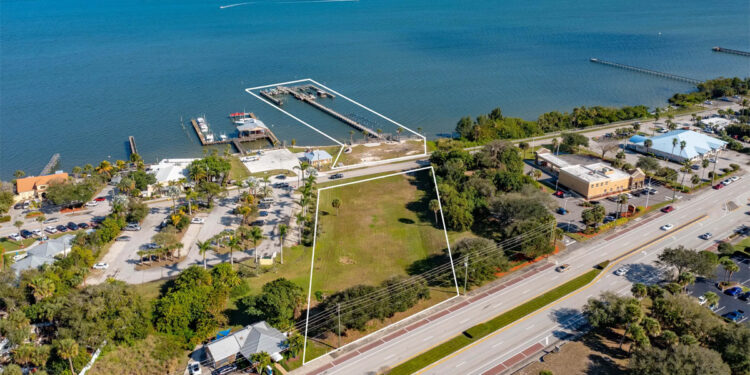 The Sembler waterfront property next to Fisherman's Landing (Credit: One Sotheby's Int'l Realty)

SEBASTIAN – During a regular meeting last week, all five council members declined to purchase the Sembler property for $2.5 million. The property is located at 1527 and 1528 Indian River Drive, in Sebastian, next to Fisherman’s Landing.

The two parcels total approximately 1.3 acres and are listed for $2.9 million. They are zoned commercial/multi-family residential and have a private 400′ pier.

“I had looked at other properties up and down the river, and I had given them an offer of $1.2 million,” said City Manager Paul Carlisle. “They had counter-offered at $2.5 million.”

The city was interested in purchasing the property to expand Fisherman’s Landing, where aquaculture and fishing businesses are already at the docks. They are currently being leased for oyster and clam farms to help clean the Indian River Lagoon.

In addition, the city was interested in preserving the view and the aquaculture at the dock. The purpose of Fisherman’s Landing is to promote fishing, and the city wanted to expand on that by purchasing the property next to it.

However, the price of $2.5 million is too much for the city to spend.

There is also a possibility of losing the businesses if the new property owner wants the docks for pleasure boating, which will be unfortunate.

Councilman Ed Dodd said that if the city purchased the property, they could sell the west side to help offset the costs, but not at $2.5 million.

“I don’t personally think we can pay that kind of money,” Councilman Ed Dodd said.

“Because once we give it up to somebody else to grab, we’re never going to get it back, and we’ll regret that,” Dixon said.

Vice-Mayor Chris Nunn said buying the property keeps Sebastian’s fishing history alive, but it all comes down to the cost.

“If we can find grants to help offset that, I’m just not comfortable spending that kind of money and using our reserves,” Nunn said.

Nunn is all for spending money to save the property from being built up with a private home, but not at $2.5 million.

Mayor Fred Jones said he is torn by it all because of the importance of aquaculture in Sebastian. However, he also feels it’s not fiscal responsibility to pay that kind of money for the property.

“Perhaps we can get some more negotiations going, some grants, or whatever; that would be wonderful. It’s just too much for me,” Jones added.

Councilman Bob McPartlan said he was willing to go to $1 million to buy the property.

“I’m willing to put $20 in and play the Powerball tonight, and if we hit, then I’ll buy the property, and the city can have it,” McPartlan said.

Is Sebastian losing its fishing village?

With inevitable growth comes change. We’re seeing it all over Florida, not just in Sebastian. So there’s a good chance that if the city doesn’t buy the Sembler property, a private developer will build something like we’ve already seen up and down Indian River Drive.

About 12 years ago, the city purchased the Hurricane Harbor property with secured funding from the Stan Mayfield Working Waterfront Grant. The idea was to preserve the land along the waterfront. In addition, they restored the building, which sat with weeds and other vegetation for many years.

Once they completed the restoration in 2014, they invited Crab E Bills to lease the building for $3,000 per month. The tenant has been there for just over eight years.

It was a multi-purpose building since 1927 for a warehouse, storage area, automobile shop, and restaurant. The restaurant was owned by Jack and Linda Eromin, who renovated the building in 1983. They both operated the establishment from March 1984 until July 2003. The building was damaged by Hurricanes Frances and Jeanne in 2004 and sat vacant for years.

The rear of the building is collapsing because of its age, and structural engineers believe it has served its use. City officials say they will work on the structure once the tenant vacates in April 2024.

Since the city purchased the land with grant monies, it will always be for preservation and to promote fishing.

A decade ago, residents were concerned about Archie’s Fish House as it was deteriorating. The county purchased and rebuilt the dock and tried to save it, but the ice house fell into the water, and the fish house was crumbling.

There was also talk that the city tore down Judah and Sons, which is not the case. Instead, the family sold the property to a private builder, and today there’s a large home in place of the former fish market.

About five years ago, the city purchased the Harbor Lights motel to save the waterfront next to the Main Street boat ramp. The property extends across Indian River Drive.

The motel itself was crumbling and full of asbestos. After a complete review and listening to public input from residents, the city decided to tear it down and now plans to either sell the west side of the property or do something else with it.