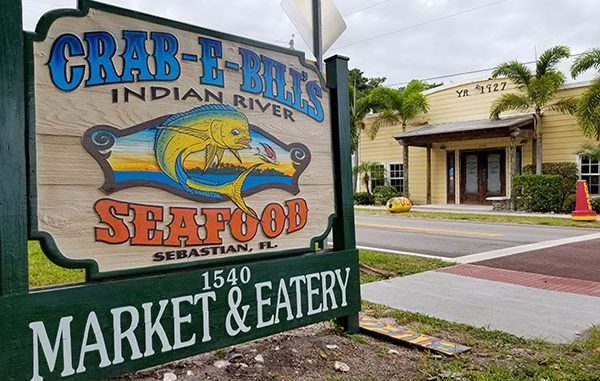 According to a public email obtained by Sebastian Daily, Crab E Bills is now declaring business losses of $112,981, plus $5,600 for a new air conditioner. According to the lease, the tenant may be responsible for the air conditioner, not the city.

Sweeney sent a “custom summary report” to the city, allegedly showing losses of $112,981 from November 1, 2021, to June 16, 2022, compared to the previous year. The losses reportedly occurred after the city shut down the back area of Fisherman’s Landing.

Crab E Bills is paying $3,000 monthly to lease the space inside the building.

Sweeney argues that when the city shut down the back part of Fisherman’s Landing, it interrupted the eatery operations for Crab E Bills.

Last month, during a city council meeting, Sweeney said he was going to talk with them about $90,000 in alleged loss of revenue. But according to a new email, Crab E Bills raised the losses to $112,981 plus the $5,600 for the new air conditioner.

When we asked City Manager Paul Carlisle and City Attorney Manny Anon about the alleged $119,000 losses, neither of them could provide a comment, citing potential litigation since Crab E Bills hired an attorney. All communication is going through Anon and Sweeney.

After having the building inspected a few times and an engineering report, the city council unanimously voted to spend $50,000 to fix the problems with the Fisherman’s Landing structure.

Some council members said it’s a temporary fix in fear of future problems with the aging 100-year-old building.

Records show that the City of Sebastian has conducted other building repairs and maintenance over time.

According to the Stan Mayfield Working Waterfront Grant and the agreement with the city, there are rules about Crab E Bills. Fisherman’s Landing is not supposed to have a full-service restaurant. They’re not even supposed to provide takeout orders. Instead, it’s only supposed to be a seafood market with a small self-serve eatery of no more than 34 seats.

In addition, the agreement does not allow them to have a server or waitress that takes food or drink orders from tables, or deliver food at the seating areas, as that would violate the terms by competing with other businesses.

Records show that when the city shut down the back portion of the building, they excused the maximum seating capacity by increasing it from 34 to 46 to help Crab E Bills. The city also added square rental footage for the eatery.

Suzy Andrews, the owner of Crab E Bills, has stated the building’s exterior is the city’s responsibility to repair. She alleges that it hurt her business when the city shut down the back portion of the building.

According to the city, the area was shut down at the advice of their insurance company due to safety issues.

Records show that when the city attempted to work with Andrews, she allegedly hired an attorney. As a result, City Attorney Manny Anon instructed city staff not to have any communication with Crab E Bills due to potential litigation, asking that all future correspondence goes between him and Sweeney.

But Andrews said that’s not what happened.

“The only reason Crab E Bill’s hired an attorney was the day after we were told that the city attorney for Sebastian sent an email to the city council and said do not talk to the tenant or the media. How else was the tenant supposed to find out anything,” Andrews said.

Soon after, Andrews began selling orange hats that read “Save Crab E Bills” and asked her patrons to wear them to show their support at the city council meetings.

When the city purchased the Fisherman’s Landing property, also known as Hurricane Harbor, they did so to preserve the working waterfront, just as they have purchased the Harbor Lights Motel to safeguard the land next to the Main Street boat ramp.

The city wants to keep the east side of Indian River Drive and will now be selling the property on the west side, where the old motel is located.

The building at Fisherman’s Landing is nearly 100 years old and has been many things in the past. However, it was never a fish market until December 2014. Before that, it was a restaurant, an empty warehouse, and a repair shop. As new tenants moved in, so did the additions to the structure.

Fisherman’s Landing, where the seafood market is located in the building, received grants to promote fishing. It was never supposed to be known as a restaurant to compete with other local businesses.

The building is not historical, as many residents are claiming.

Now the city is fixing the structural problems, which took months to set up because of having to do two inspections and an engineering report.

There is still the argument of whether or not Sebastian taxpayers should pay Crab E Bills $119,000 for alleged business losses and a new air conditioner.

There’s been a lot of misinformation published on social media, suggesting that the monies to reimburse Crab E Bills can come from the Stan Mayfield grant or from the funds they paid to the city in rent. All of this is misinformation.

The only way to collect monies for the alleged business losses at Crab E Bills is by using tax dollars from Sebastian citizens. But if an insurance policy pays it, the citizens are still on the hook for rising premiums or possible cancellation of the policy.

For The Love Of Paws Offers Free Spay & Neutering

For The Love Of Paws Offers Free Spay & Neutering