Tropical Depression Expected to Form in Atlantic This Weekend 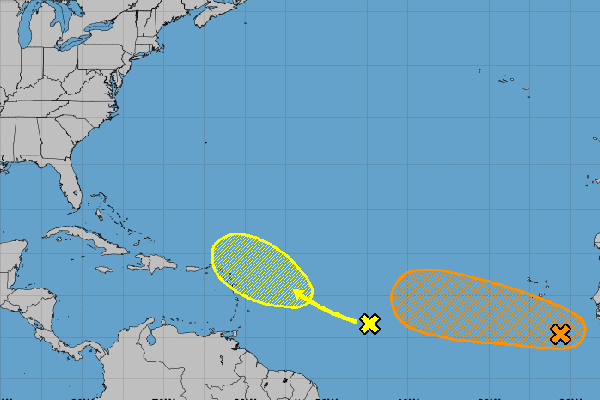 We’ve been keeping an eye on two tropical waves in the Atlantic that appeared a couple days ago.

The first one is located a few hundred miles south of the Cabo Verde Islands near the Caribbean and could become a tropical depression this weekend.

“Environmental conditions appear somewhat conducive for gradual development over the next several days, and a tropical depression could form late this weekend or early next week while the system moves generally west-northwestward across the tropical Atlantic,” the National Hurricane Center said in a statement.

The disturbance has a 60 percent chance of formation during the next five days.

The second disturbance may just fizzle out as it gets closer to the Caribbean, but it’s still too early to predict.

“This system is expected to move slowly west-northwestward, and

some slow development is possible early next week as it approaches

The chance of formation is 20 percent during the next five days.

Sebastian Daily will continue to monitor any tropical developments.