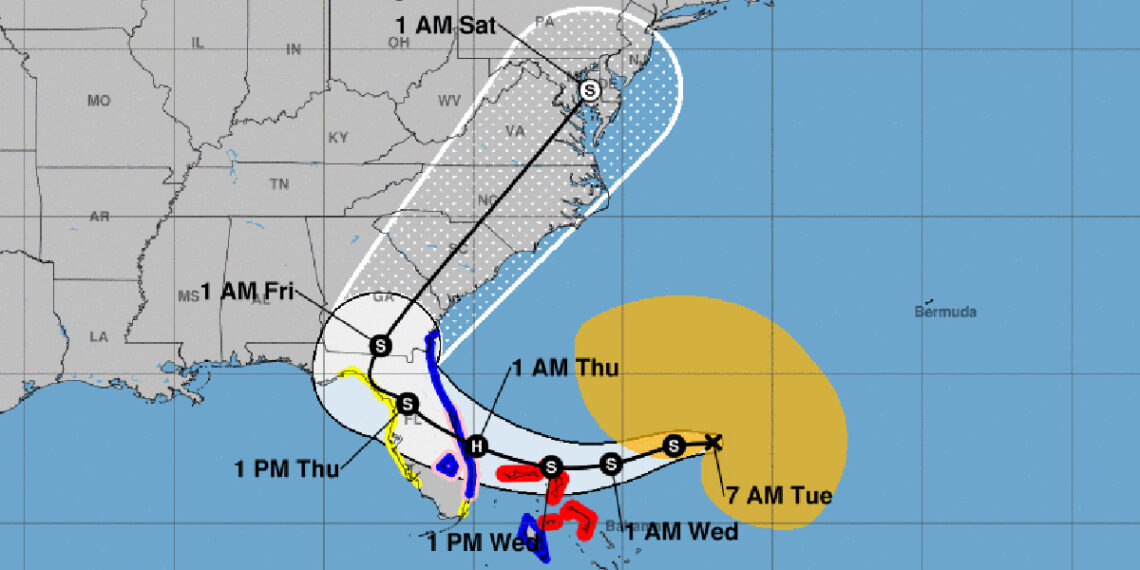 Sebastian City Manager Paul Carlisle is asking residents to take time to pick up any loose debris in their yards that high winds could pick up. The time to prepare is now.

Nicole is expected to become a Category 1 hurricane as it moves closer to the Bahamas and Florida. As a result, much of the east coast is under a Tropical Storm Warning, as well as a Hurricane Watch.

“The track guidance has shifted northward a bit during the next 2-3 days. As a result, the NHC official track forecast has been nudged northward and is closest to the GFS, ECWMF, and HCCA solutions,” the National Hurricane Center (NHC) said in a statement.

The NHC said with Nicole’s structure beginning to take on more tropical characteristics, strengthening is likely to commence later today.

We could see 2-4 inches of rain, and we have a higher-than-normal high tide due to the moon cycle, worsening coastal flooding. Storm surge potential is 3 to 5 feet.

At 8:45 a.m., Nicole was located 380 miles from the northwestern Bahamas, moving at 8 mph with maximum sustained winds of 50 mph.

“The NHC intensity forecast continues to show Nicole near or at hurricane strength as it’s moving near the northwestern Bahamas and approaching the east coast of Florida,” a forecaster with NHC said.

Due to its large size, Nicole will likely cause significant wind, storm surge, and rainfall in Florida.

A Tropical Storm Warning means that tropical storm conditions are expected somewhere within the warning area within 36 hours.

A Storm Surge Warning means there is a danger of life-threatening inundation, from rising water moving inland from the coastline in the indicated locations. Persons located within these areas should take all necessary actions to protect life and property from rising water and the potential for other dangerous conditions. Promptly follow evacuation and other instructions from local officials.

A Hurricane Watch means that hurricane conditions are possible within the watch area. A watch is typically issued 48 hours before the anticipated first occurrence of tropical-storm-force winds, conditions that make outside preparations difficult or dangerous.

Sebastian Daily will continue to update you when more information is available.