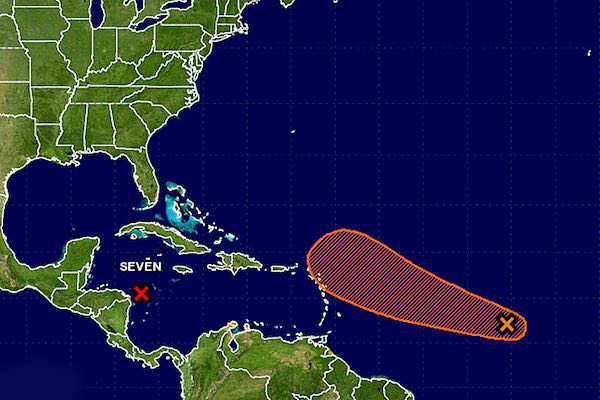 UPDATE: Looks like we’re in the clear! Please read this update.

SEBASTIAN – Hurricane trackers in Sebastian and Vero Beach have been following a low-pressure system in the Atlantic Ocean that’s moving northwest at around 15 mph.

As of right now, the chance that the weather system could develop into a hurricane and strike the United States is low, according to the National Oceanic and Atmospheric Administration (NOAA).

The low-pressure system continues to produce disorganized showers and thunderstorms. Unfavorable environmental conditions should limit development of this system during the next few days, but some development is possible by the weekend.

Even so, the system is unlikely to become a Tropical Storm or Hurricane.

The activity in the Atlantic and Gulf figures in a hurricane season that hurricane center forecasters have projected to be above normal this year, brewing up anywhere between 11 and 17 named storms.

Tropical Storm Franklin has formed in the Caribbean Sea about 100 miles off the coast of Honduras and headed for Mexico, according to the National Hurricane Center.

Franklin is the sixth named storm of the 2017 hurricane season.

Heavy rains are expected as the system moves northwest across the Yucatan Peninsula late Monday and into Tuesday.