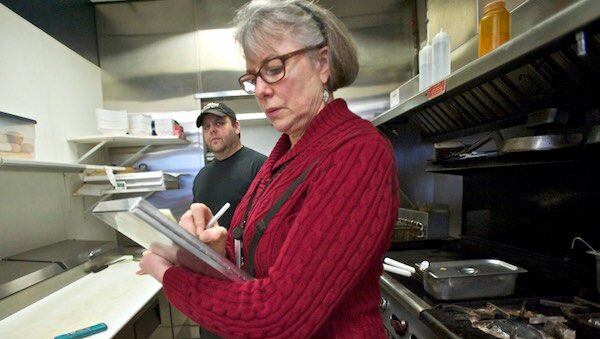 The month of September was busy with local area inspections throughout Sebastian. Most establishments did well with only a few violations.

Our reader’s choice winner for the Best Restaurants in Sebastian had 8 violations. The health inspector labeled their violations as “basic” for things like a floor tile in disrepair, a small hole in an interior wall, a missing hose bibb, and a bottle of degreaser that wasn’t labeled.

Sebastian Saltwater has always done well in its health inspections, even before the name change from Capt’n Butchers.

Ruby Tuesday received 11 violations for garbage found on the ground near a dumpster, a hole in a wall near a mop sink, soiled hood filters and pipes in the kitchen, and a handwashing sink blocked and not accessible for use at all times.

Giuseppe’s Pizzaria had 10 violations, including one labeled as “high priority” by the health inspector for an unsafe temperature involving chicken wings. According to the inspector, the wings were cooling for two hours at 90 degrees instead of 70 degrees.

The other violations include a hole in one of the restrooms, a pizza oven hood heavily soiled, stored flour not appropriately covered, multiple wiping cloths left on cutting boards, and a soiled blade on a can opener.

The Zoo Bar at Skydive Sebastian had 5 violations labeled all “basic” by the health inspector for things like tongs stored on equipment, no paper towels at a handwashing sink, and a dirty fan.

The Hen House had 5 violations, including 2 marked as “high priorty” for storing raw meats next to covered deli meats and french fries and a missing hose bibb at a vacuum breaker. The basic violations were for water temperature at 110 degrees instead of 138 degrees.

Even so, the Hen House still has one of the least health inspection violations compared to other local businesses.

Papa John’s had 5 violations and 2 labeled as “high priorty” for whipped cream cheese sitting on a counter for 30 minutes tested at 67 degrees instead of 41 degrees, and a missing splitter for a mop sink faucet.

The basic violations were for not displaying the restaurant food license and no proof of required state-approved employee training on handling food.

Burger King on US1

Burger King received 3 violations for a dirty ceiling in the kitchen, ice buildup in the reach-in freezer, and not having the latest inspection report available.

Bamboo Wok had 9 violations, including 3 labeled as “high priority” for washing utensils without sanitizer, raw chicken over fresh vegetables, and an employee rinsed gloves instead of changing them after touching raw chicken.

All other violations were maintenance-related items such as a missing ceiling tile, a cracked container, dust on a shelf, and a loose hand sink.

The Sebastian Train Depot received 3 violations for items in a display case that did not include a date or a product description and for not having a written consumer advisory for undercook eggs if ordered by customers.

TJ’s New York Style Pizzeria received 7 violations, including 1 labeled as “high priority” for storing sauce with cooked garlic at 54 degrees instead of the recommended 41 degrees.

Some of the basic violations include dust on ceiling tiles in the kitchen, a gap in an exterior door, dirty hood filters, a pipe leaking water at a hand sink, and a container of flour not labeled.

The diner has 5 violations, including 3 labeled as “high priority” after an employee touched an English muffin without wearing gloves, utensils were rinsed but not sanitized, and no time marking for items such as sausage and hollandaise.

The other 2 items were for things like a pitcher in a handwashing sink and dust on the walk-in cooler fan covers.

The Italian Cousin had 15 violations, including 3 that were labeled as “high priority” for the dishwasher machine not set at proper sanitization due to a malfunction, the inspector observed an employee garnishing a plate with lemon and parsley without gloves, and cooked mushrooms held at 95 degrees instead of 135 degrees.

All other violations were labeled basic for having containers stored on the floor and not the shelf in the walk-in cooler, a hole in an interior wall inside the storeroom, dust on walk-in cooler fans, grease on a wall next to hoods in kitchen, and cooked pasta in the cooler didn’t have a date.