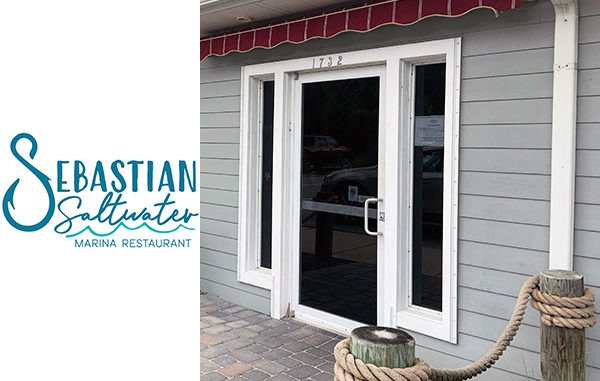 It’s now official; Captain Butchers changed its name to Sebastian Saltwater Marina Restaurant. The owners are the same, the staff is all the same, and the food (except for a few menu tweaks) will be the same.

“The owners have always had a vision for the property since they purchased it about three years ago of rebranding it and marketing it as a full-service marina, a lodging destination, and charter fishing operation – not just a restaurant and bar,” General Manager Jonathan Kennedy told Sebastian Daily.

Their vision is for it to be the premier full-service fisherman’s destination in the area. Kennedy said now is just the right time to establish that identity. There was also the occasional confusion with tourists between Capt. Hirams and Capt. Butchers, which didn’t help.

“So we’ve reprinted the menus, got new uniform shirts for all the staff, and will roll those out this coming week. We’re hoping the signage on the front of the building, and the parking lot, as well as out in the channels, will be ready to install in the next few weeks. They’re going to look great,” Kennedy added.

With the reprinting of the menus, they took the opportunity to streamline the menu a little bit to make for more quick and efficient service out of the kitchen.

For example, they removed one or two items that took a little longer to cook (or have gotten too expensive to source) and added one or two new items (mojo marinated pork with plantains).

However, Kennedy said the menu is the same, just visually a newer, more modern look. He expects this upcoming season to be incredibly busy, so they wanted to ensure their kitchen could keep up with the demand.

Kennedy also said they are trying to fill some line cook positions, so if anyone is interested, call or stop by and ask for him.

“Our focus will always remain on fresh fish – we are lucky to have a commercial fishing license that allows us to purchase fresh fish right from our fisherman, so when we say we have a fresh catch, it really is fresh,” Kennedy explained.

Earlier this year, Sebastian Daily named this location the best waterfront seafood restaurant in Sebastian. The seafood was very fresh and wasn’t too expensive. We enjoyed their crab cakes too.

Kennedy understands that there may be some confusion during the first few weeks after the name change, especially until they get the new signage put up on the building. Many people, including the snowbirds, will still call them Captain Butchers. But Kennedy said that is ok, as long as they keep coming in.

“We think in the long run, the branding will be a great addition to the north end of the strip,” he said.

In addition, they will eventually be expanding the outside bar to have it wrapped around to the north deck, which will be rebuilt to have a covered tiki bar.

“We’ve renovated and upgraded our 1 and 2 bedroom units, and we are also in the process of getting our own charter fishing boat operation up and running soon,” Kennedy said.

The new Sebastian Saltwater Marina Restaurant name and all the upcoming improvements will make this a fascinating place to visit. It sounds like it could become the premier full-service fisherman’s destination in the area.

Sebastian Saltwater is located at 1730 Indian River Drive in Sebastian, Florida. Parking is available near the building and across the street.