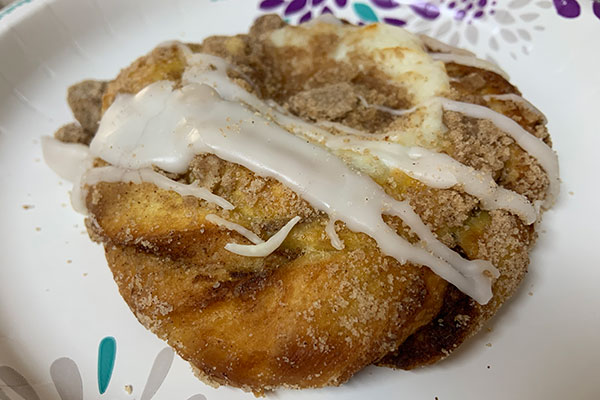 We visited Holy Cannoli in Barefoot Bay, twice in the last two weeks, as it had been quite a while since we checked out their bakery.

Before Thanksgiving, we stopped in and ordered a large chunk chocolate chip cookie, two brownies, and a cheese danish, which came to $12.00.

The large chunk chocolate chip cookie was as hard as a rock. I tried one bite, and I was done. The brownie was not as hard as the cookie, but not fresh. If I had to take a guess, I would say they were at least five days old. The cheese danish was more of the same, dry and stale. There is no way they are checking the quality of their desserts.

Our second visit was on Thursday, December 5, 2019. During this visit, I made it a point to ask how fresh the items were. I was told that they were made within 24 hours.

We wanted to see if the quality of the items we ordered prior had improved, especially since they charge a premium price. So, we ordered a large chunk chocolate chip cookie, a cheese danish, and an ultimate brownie. Our total was $8.00.

The large chocolate chip chunk cookie was as hard as a rock on the outsides but a little softer in the middle. It was an improvement from the last visit, but still, in my opinion, not worth eating.

Next, we tried the cheese danish. It was slightly better than our last visit. But, it was still dry.

Last but not least, we tasted the ultimate brownie. It was also dry, so I just ate the toppings.

We suggest that Holy Cannoli step it up and make sure they are serving quality fresh desserts as they tell patrons. Perhaps they should focus on a smaller quantity of baked goods.