by Brian LaPersonerie
A A 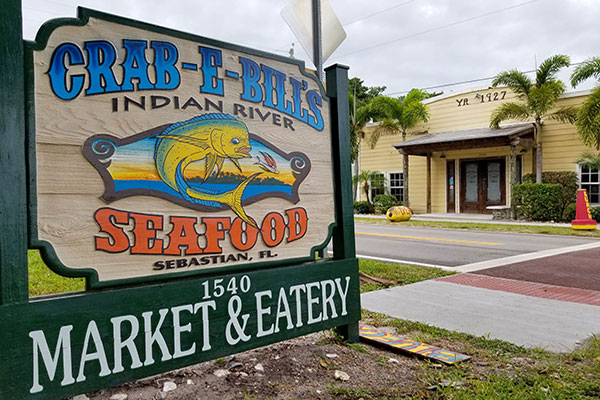 On a steamy and stormy Saturday afternoon with fresh seafood on my mind, I dropped into Crab E Bill’s Seafood Market & Eatery. It’s a place along Sebastian’s riverfront that can easily be missed but in my opinion, should not. Located inside an old building rich with history and stories only your granddad could tell, it’s now one of only a few places left in our area to buy fresh local caught and never frozen seafood.

I find myself having this conversation often with questions like, “Why do many of our local restaurants sell frozen and not fresh never frozen seafood?” You would think, well we live in Florida, one of the fishing capitals of the world, we have many waterfront restaurants that serve seafood, it should be simple to find a place that prepares a fresh local catch, not exactly. I will talk about this later in this review, along with a little history that includes cops and bootleggers!

When ordering, it was imperative for me to eat and support local I chose clams grown right here in the lagoon. I decided to taste a few raw on the half shell as well as ordering a dozen steamed in butter and garlic. The clams that were available on the day we visited were little necks. Littlenecks are the smallest commonly available hard shell clam on the east coast. They are named after Little Neck Bay on Long Island which was once an important clamming center. These clams on the half shell were about an inch an a half wide, eaten raw they were sweet, and tender but a little muddy in flavor, which comes with the territory and just not as clean in taste as northern grown. These same clams steamed with butter and garlic were outstanding. They were cooked to perfection with a fresh aroma, soft, tender, and they were certainly a hit with my group. There was no question that these clams are the freshest available.

Our next appetizer choice was fried pickles with a housemaid ranch dressing for dipping. It was the first time I’ve seen pickles quartered, battered and fried. The outside was light and crispy, but it still had a nice chunky and crunchy pickle inside. Someone deserves a pat on the back for these as they were done very nicely.

All three of us, in my group, decided to have a fish sandwich. I chose the fresh local caught Hogfish, also known as Hog “Snapper” as well as my dad. My stepmom went for the local Mangrove Snapper, and she said it was even better than the Hogfish. Hogfish is named so because its head looks like a pig’s snout. Their “noses” are used to retrieve crab and shrimp from reefs and also to dig for mollusks in the sand.

Hogfish hold more moisture when cooking than other fish because of their unique ability to convert cholesterol into pure fat and store it intramuscularly, which adds to the oils and moisture in its flesh. I chose to have my Hogfish grilled to keep the flavor clean and simple. It was flaky white, very mild, and had sweet undertones.

My dad decided to have his Southern-fried; it was a large piece served light, and crispy. My sandwich came with very fresh crisp sliced tomato, crunchy lettuce, and sliced onion piled high on a brioche bun that was soft, fresh-baked, and so easy to eat. Each sandwich came with a choice of two sides. I went with the sweet potato fries and house-made cucumber salad. The salad was tart, with a touch of sweet, cubed, not sliced cucumber, which made this selection a bit unique. Its flavor reminded me of my own recipe. As for the sweet potato fries, they were hot and perfectly crispy. I find when ordering these elsewhere they can be soggy, but these were fried just right.

Something I learned while visiting Crab E Bill’s is that they are very conscious of their frying. They use only the best cooking oils and separate fryers for each type of food. Not only does this ensure those allergic to seafood are safe, but you won’t get French fries or their house-made potatoes chips that taste like fish! And for the wheat sensitive customer, they also offer a gluten-free batter for frying up your favorites.

Crab E Bill’s insures that 100% of their products are free from preservatives and their seafood is the highest of quality.

Heather Quigley of Crab E Bill’s explains, “85% of our products are local and everything else whether it be a salmon, a halibut from Alaska, is overnighted and comes in whole on ice and is only filleted as needed. Fresh local caught means caught within 1-2 days and never frozen. I can tell you when it was caught, where it was caught, who caught it and even exactly when it came in.”

Crab E Bill’s serves fresh local caught seafood. Although the cost of fresh seafood can have you digging deep in your pockets, there is an easy explanation. Just think, if you had to drive your boat 20, 40 or sometimes hundreds miles or more into the ocean, pay for your fuel, insurance, or being away from your family for months on end, wouldn’t you expect to get top dollar for your catch?? But, it is worth it for the quality that you receive.

Now the questions that arise so often, “Where is the best place to eat fresh seafood?” And “Why do many of our local restaurants sell frozen and not fresh, never frozen seafood?” The answer is not so simple. It breaks down to supply and demand, environmental changes, and $$$$.

The U.S. trades in seafood with countries all over the world and the countries it buys the most from include Canada, China, and Chile. Major buyers of U.S. seafood include China, Japan, and South Korea. Today shrimp, mostly farmed in Asia, is the most consumed seafood in the United States: Americans eat nearly as much of it as the next two most popular seafood’s (canned tuna and salmon).

Much of the commercially caught fish is flash-frozen or cryogenically frozen right on the boat within moments of it leaving the water. This flash freezing reduces the number of ice crystals that form, preserving the texture of the flesh. The process also eliminates waste by removing the possibility of spoilage before the boat gets to the dock. It can also ensure stable pricing for both the fisherman and the foodservice with consistent year-round availability. Simply, importing from foreign sources is essential to keep up with the demand of the American market.

There are also some fish the U.S. that have been imported more heavily in recent years because domestic stocks have dried up. But, we’ve all heard the warnings about farm-raised fish from China, and I’m positive you’d rather support a local fisherman. Crab E Bill’s #1 spearfisherman is also an officer in the IRC sheriff’s office. So when he’s not catching criminals, he’s catching your dinner!

Like the many fish houses that once stood along the riverfront with names you may recognize like, Youngblood’s Fish House, Sembler & Sembler, Sims Fish House, Archie Smith Wholesale Fish Co., Judah & Sons, and Robert G. Hardee Eagle Fish Company this city was built on an industry of commercial and recreational fishing and is why Crab E Bill’s is where they are today.

Now, unfortunately, if you can read between the lines, what this also means is that Crab E Bill’s is not a restaurant and cannot act as such, which means restrictions like no table service, plastic utensils, no entertainment and limited hours. And with the city owning the property this means competing with local private restaurant owners is a conflict of interest. Although the City of Sebastian has made some improvements to the property like a new dock behind the eatery, there are no ladders or enough water for that matter to allow any customers to come by boat. Adjacent to the market and eatery is the city owned working fish house and observation deck. But it lacks that luster to drive visitors and locals. I agree that it’s essential to preserve this cultural icon, but I think it can be more attractive to its guests. To see such a beautiful and historic building sit semi-empty doesn’t sit right with me. Inside the old building, the walls littered with photos from now and then. This place speaks to me. But the empty and nonfunctioning bar, the empty outdoor seating and a stage with no music is a sight for sore eyes. If the many previous ownrs of this property could see it now, I’m sure they’d be happy to see it still standing but disappointed of its use. If the walls of this old place to talk, I could write a novel.

According to the Sebastian Area Historical Society, Inc., the story goes something like this: “Before it was the popular Hurricane Harbor restaurant that opened on the Sebastian waterfront in 1978, this building was the McCain Garage and auto repair shop and served as a “front for receiving and storing contraband liquor during the Prohibition period from 1919-1933. Bob McCain’s home was directly across the street. He was the area’s most notorious bootlegger. McCain bought the garage in the mid-1920s to house his car and truck collection. Its dock was built high enough for a boat to come underneath it without being seen from the street. Thus, it was an ideal place to bring in illegal liquor from across the Indian River after it was delivered to the ocean side of the barrier island by boats coming from Cuba and the Bahamas. Large stacks of boxes were left on the beach by the smugglers to be transported to the mainland. Using McCain’s many vehicles the contraband goods were taken to other points across the State. After the sheriff made numerous searches, McCain had a secret trap door placed into a small basement area of his house. Eventually, after a raid by Federal Government agents, McCain was arrested, convicted and then imprisoned in Georgia. Prohibition ended in 1933, and the building once again became an operating garage before its abandonment during the depression years. In the late 1960s, an addition was built on the riverside for an oyster packing plant. Storms and predators closed that operation. Afterward, it was used for storage than a seafood market and closed again. In 1978, Carol and Doug Moss opened their Hurricane Harbor restaurant, with its kitchen in the old shucking plant. In September 1979, hurricane David crossed Sebastian with 100 mph winds. The building’s pine beamed rafters held, but as the tin roof weakened, Moss and two other men tied themselves to lifelines and crawled to the highest part of the roof to hammer the tin on the roof back in place. The restaurant was sold and opened briefly as The Captain and the Cowboy restaurant before it closed in 2004 following extensive damages from Frances and Jeanne. It was vacant until it became part of the 2009 Stan Mayfield Working Waterfront State Grant.”

In conclusion, Crab E Bill’s does an outstanding job not only in their eatery, but they provide a valuable service with their market. I’m looking forward to seeing the City of Sebastian continue with their role in providing them with the tools to succeed.