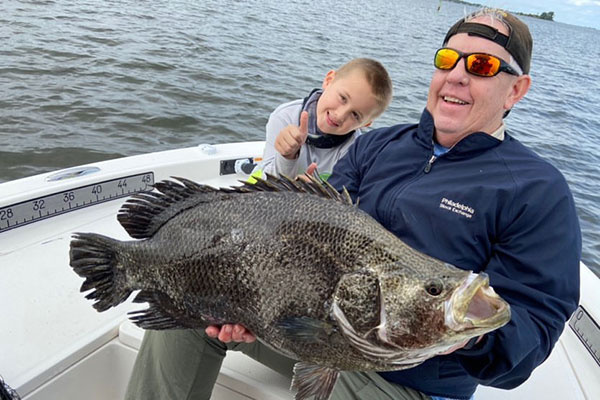 A North Carolina man drove down to Florida for Christmas to test some new fishing lures at the Sebastian Inlet. While he was here, he wanted to take his father-in-law fishing.

Merv Rubiano, who owns Strategic Angler LLC, is a lure maker who does inshore fishing with Captain Glyn Austin of Going Coastal Charters. Austin has been helping Rubiano ever since he started making fishing lures full time. Rubiano also has a gallery in North Carolina, where he occasionally makes gyotaku prints and paints artwork on lures.

Gyotaku is created by pressing rice paper onto a fish covered with ink or paint. This technique was developed about 100 years ago by fishermen in Japan.

Pictured in the main photo is Rubiano’s father-in-law, David Stewart, and the boy is Capt Glyn’s grandson who wanted to spend the day with them.

“My father in laws bucket list included tripletail, and December 15 is also his birthday, so we wanted to take him out fishing while I test some lures. He caught the tripletail with a jig using a Shimano Teramar rod and Stradic spinning reel with 20 lb test. After that awesome surprise, we caught several lizardfish, ladyfish, and released several trout and sheepshead to round out our early day before the storms rolled in on Monday,” Rubiano told Sebastian Daily.

Needing to commemorate his checkmark on his bucket list, Rubiano decided to print his latest accomplishment, a 29″ tripletail. He also printed a lizardfish so he could hang it at his gallery back home in North Carolina.

The Sebastian Inlet attracts people from all over the world and is one of the top tourist destinations on the east coast.

Sebastian residents invited to ‘Refuse to be a Victim’ on Jan. 7th

Sebastian skydiver lands on power lines next to Roseland Road

Sebastian skydiver lands on power lines next to Roseland Road