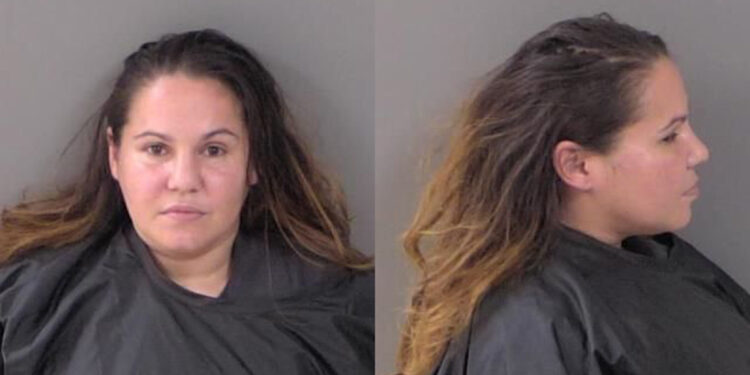 Police arrested a 40-year-old woman who told officers she forgot to scan $343.18 in merchandise using the self-checkout at Walmart in Sebastian, Florida.

On Friday, at approximately 5:30 p.m., officers were dispatched to the Sebastian Walmart, located at 2001 U.S. Highway 1, about a theft.

A loss prevention officer told police that the suspect, Nicole Machado of Vero Beach, was not scanning all merchandise at the self-checkout aisle. The “checkout host” was alerted, and they warned Machado to scan all items.

However, Machado continued to scan one item but bagged two.

“Even with the warnings from Walmart, Nicole [Merchando] continued to scan multiple items at a time and was also not scanning some items. Nicole [Merchando] then paid for some of the items she scanned, which totaled 70 items for an approximate total of $278.93,” police said.

Merchando then exited the grocery doors passing all points of sale and making no attempt to pay for the skipped items in her cart. She was stopped by loss prevention and asked to follow them back to the loss prevention office, which she agreed to do.

The loss prevention officers separated the non-paid merchandise, which included 47 items valued at $343.18, and notified the Sebastian Police Department about the suspect stealing from Walmart.

Merchando told law enforcement that she was “in a rush to leave and that she must have accidentally skipped a few items and was willing to pay for it,” the affidavit said.

But the police didn’t see it as an accident because of the number of missed items.

“She continued to provide excuses that she takes medication and it could cause her to miss items. I asked her if she was aware of this issue, why would she not use a store employee to check her out,” the officer said.

However, Merchando could not answer, and the police charged her with theft.

While driving to the jail, Merchando stated that she “made a mistake and that she has learned from this mistake and would not make it again,” the affidavit said.

Merchando was transported to the Indian River County Jail, where her bond was set at $500.