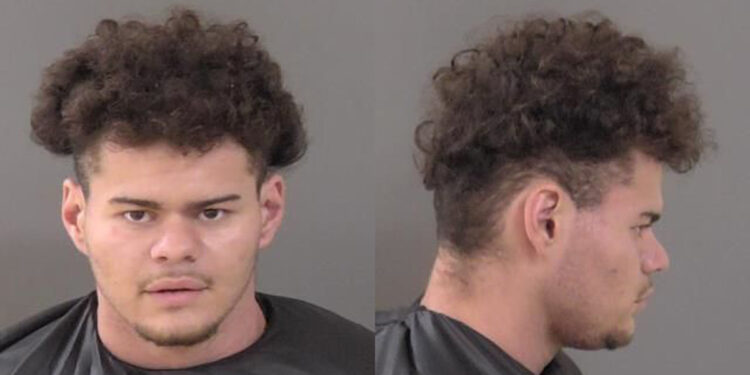 A 19-year-old Vero Lake Estates man was arrested and charged with Cruelty To Animals after he injured a dog, according to the Indian River County Sheriff’s Office.

Deputies were dispatched to the 7900 block of 99th Avenue about an injured dog after the girlfriend of the suspect watched a gruesome video on a Facetime call showing an injured dog. The suspect was identified as Dameion Terrance Regoli of Vero Lake Estates.

After the video call, the girlfriend contacted Regoli’s parents and told them she witnessed “blood everywhere” and “the dog’s head is busted open,” the affidavit said. She told the parents that Regoli was under the influence of “Xanax,” also known as Alprazolam, and threatened to overdose. The parents then contacted law enforcement.

Soon after, deputies arrived on the scene and gave lawful announcements via the PA system for Regoli to exit the residence and surrender to law enforcement.

Approximately 10 minutes later, Regoli exited the home, and deputies took him into custody. While speaking with him, deputies said he was noticeably impaired and could not form a coherent sentence. He also had a white powder substance seen around his nose and mouth, consistent with drug use.

Deputies then entered the residence and observed a gray female dog in the living room with a large laceration.

Deputies then observed a white rectangular pill divided into four smaller sections known to them as Alprazolam. A serrated kitchen knife was on the floor in a bathroom with a noticeable amount of blood on it.

Regoli told deputies he did not inflict harm to the dog and that his dog must have fallen out of the bed but was not in the room when the puppy fell. He stated that he attempted basic first aid but had no success.

“Upon law enforcement’s arrival, no first aid equipment was seen on the dog,” the affidavit said.

Investigators also said the injuries to the dog are not consistent with a fall and determined “Regoli intentionally inflicted pain to the dog, causing it to endure unnecessary pain and suffering. Regoli maliciously mutilated the dog with a laceration approximately 6 to 8 inches in length and deep enough to see its skull.”

Animal Control told Sebastian Daily that the dog named “Miami” was transported to a 24-hour veterinarian in Vero Beach. The puppy is a mixed Pit Bull, less than two years old and still being treated.

Regoli was transported to the Indian River County Jail, where he remains on a $125,000 bond.