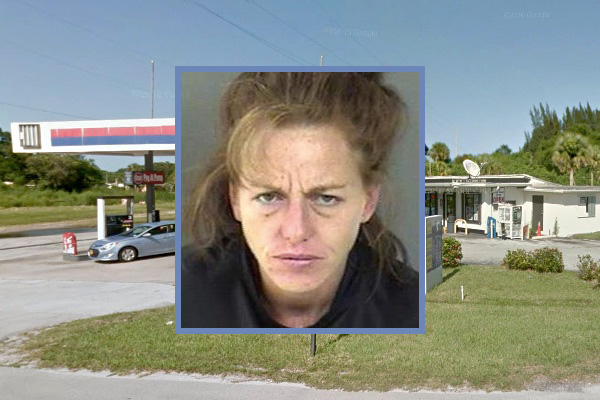 VERO BEACH – A deputy with the Indian River County Sheriff’s Office was traveling on 27th Avenue when he spotted a woman dancing on top of a coin-operated vacuum cleaner at Beverage Stop Gas Station in Vero Beach.

As the deputy made a U-turn to investigate, the woman ran behind the building. The deputy found her hiding behind a fence at the Vero Beach gas station. He then ordered her to “come out into the open grass area and lay flat on her stomach” where she was taken into custody without incident,” according to the report.

Lisa Brown, 35, told the deputy that she was trying to urinate behind the building before he showed up. Brown said she was also trying to locate her missing five dollars on the ground.

However, Brown’s story kept changing, and she never gave the deputy a reason why she was at the store or dancing on top of the vacuum cleaner. She “kept rambling while she was talking,” the report said.

The suspect became uncooperative and began barking at other deputies as they arrived. A glass pipe with chore boy was located in the grass area near the vacuum cleaner. There was also a flashlight on the ground that was turned on.

Brown was arrested and transported to the Indian River County Sheriff’s Office and charged with loitering.