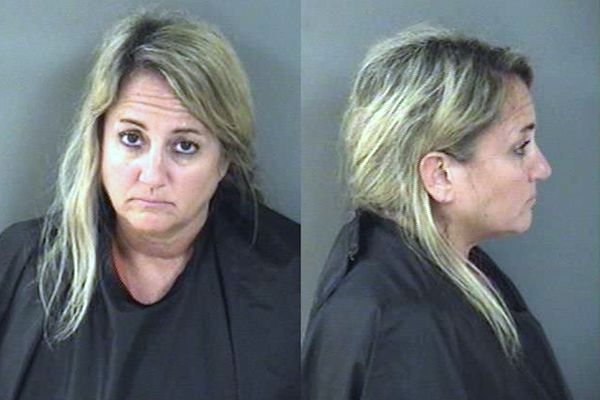 VERO BEACH – A 48-year-old paralegal in Vero Beach, who was already out on bond for a charge of aggravated assault with a deadly weapon, was arrested again on felony charges, according to the Indian River County Sheriff’s Office.

Leah Marie Hubbard was arrested again on a charge of Felony Carry Concealed Firearm, and Felony Aggravated Assault with a Deadly Weapon.

On Friday, a deputy observed Hubbard traveling on 4th Street without a functioning tag light, the report said.

As the deputy was initiating the traffic stop, Hubbard began driving erratic by making a couple of abrupt turns.

Once the deputy made contact with Hubbard, she said her passenger had to use the restroom, which was why she was driving erratically.

The deputy asked for consent to search Hubbard’s vehicle, but she declined. A K-9 was used and there was a positive alert to the vehicle.

While conducting a search, deputies located a “chore boy” near the area of the driver’s seat, which is commonly used as a filter to smoke illicit substances.

Sitting near the driver’s seat was a purse with a loaded Glock 19 handgun. Hubbard told deputies she has a valid concealed weapons permit, but dispatch advised there was no record found, according to the report.

Hubbard was arrested and transported to the Indian River County Jail where she was charged with Felony Carry Concealed Firearm, and Felony Aggravated Assault with a Deadly Weapon.

In July, Hubbard was arrested on charges of Felony Aggravated Assault with a Deadly Weapon in Vero Beach after driving reckless.

Hubbard was in an argument with her son and chased him on 20th Avenue in Vero Beach, trying to force him off the road with her vehicle.