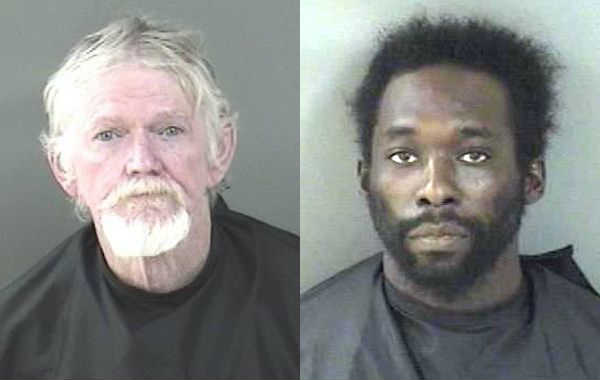 VERO BEACH – Two people were arrested in the 1300 block of 25th Court SW about an incident at a home in Vero Beach for injuring a pregnant woman and brandishing a firearm.

The Indian River County Sheriff’s Office received a call about a disturbance over rent money.

Deputies spoke with two victims, Alexis Perna and William Thompson, who said they were in a physical altercation with Robert Thompson and Gary Monestime.

Robert Thompson, 66, and Gary Monestime, 32, were attempting to throw Alexis and William out of the house for not paying any rent.

Robert then pulled an unknown caliber revolver and placed the barrel of the gun to the back of William’s head. He then told him to get out of his house.

Monestime then pushed Alexis, who is pregnant, against a table causing her pain to her right side and abdomen. She was transported to the Indian River Memorial Hospital for treatment.

Monestime then struck William several times about the face and upper body with a closed fist. The victim had red marks and scratches on his chest and face and was bleeding from a small area on his upper chest.

Robert Thompson was arrested and charged with Felony Aggravated Assault With Deadly Weapon. Bond set at $5,000.

Gary Monestime was arrested and charged with Felony Battery and Resisting Arrest. Bond set at $3,500.