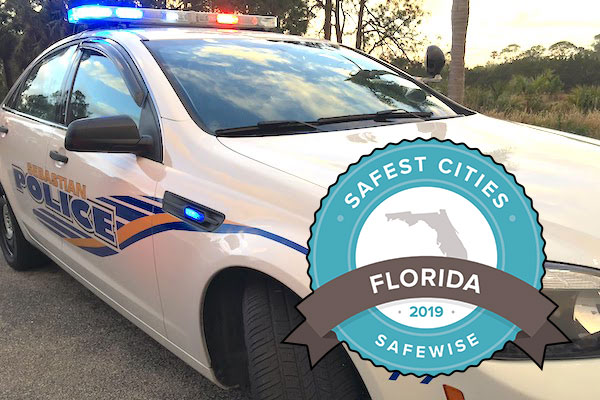 SEBASTIAN – While the violent crime rate in Florida’s 50 Safest Cities is nearly 2.5 times lower than state and national averages, Sebastian is ranked #38 our of 142 cities, according to the data collected by SafeWise.

To identify the Safest Cities in Florida, SafeWise reviewed the most recent FBI crime report statistics from 2017 and census population data. Cities that fell below designated population thresholds or that failed to submit a complete crime report to the FBI were excluded from the ranking system.

“Our evaluation is based on the number of reported violent crimes (aggravated assault, murder, rape, and robbery) in each city. If there was a tie, we also factored in the number of property crimes (burglary, arson, larceny-theft, and motor vehicle theft). To level the playing field, we calculated the rate of crimes per 1,000 people in each city. Which makes it easier to directly compare the likelihood of these crimes occurring in cities with vastly different populations,” SafeWise said in a released statement.

In Florida, Key Biscayne was ranked #1 with only two violent crimes reported in 2017, and neither was murder, robbery, or rape.

The city with the fewest property crimes was Marco Island, with 122 reported in 2017.