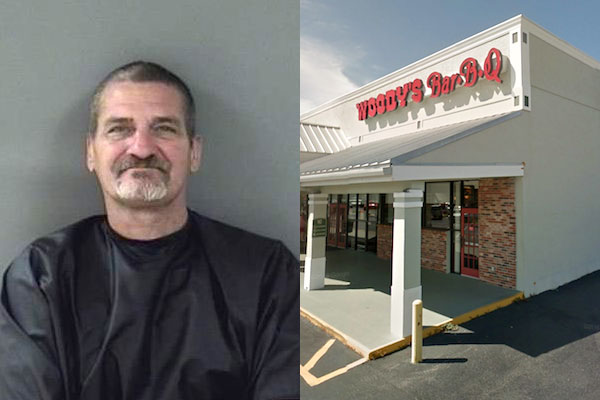 SEBASTIAN – A man who said he wasn’t going to calm down because he was watching a game started a disturbance inside Woody’s on Friday, according to the Indian River County Sheriff’s Office.

Deputies arrested 57-year-old Philip Guccione on a charge of Battery after punching a restaurant employee in the face.

Guccione, who is a homeless man living in the woods next to Woody’s known as “Homeless Phil,” was in the bar area yelling profanities. Employees asked Guccione repeatedly to calm down, the report said.

“He was told multiple times to lower his voice, or he would have to leave,” the deputy said.

Guccione continued to yell and disturbed everyone in the restaurant. An employee said Guccione had three beers while he as at the bar.

Two employees were in the kitchen when they heard yelling coming from the dining room. They ran out and asked Guccione to quiet down.

One of the kitchen employees tried to escort him out of the restaurant, and Guccione punched him in the face, the report said.

Deputies observed redness around the employee’s face and left eye.

Guccione, who had a strong odor of alcohol emitting from his person, told deputies that he was in an argument with the employees and left, according to the affidavit.

However, deputies say Guccione changed his story and stated he was pushed first by one of the employees, the affidavit said.

Guccione was transported to the Indian River County Jail. As of Monday evening, he was still being held on $2,500 bond.