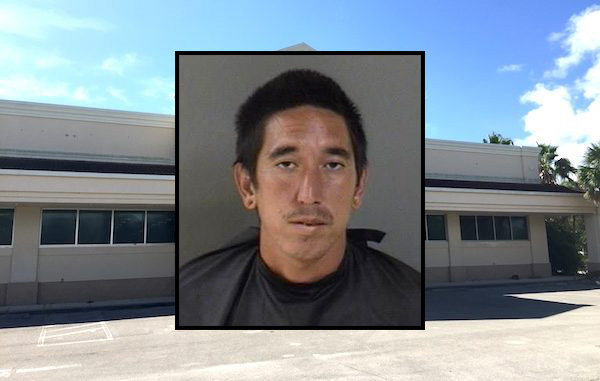 A man who was walking on the property where the old Eckerd building used to be was arrested for trespassing, according to the Indian River County Sheriff’s Office.

The property has a signed blanket trespass warning on it that authorizes the Indian River County Sheriff’s Office to issue trespass warnings and/or arrest any individuals found to be in violation.

On Monday morning, a deputy informed Eddie Robert Yaddow, of Sebastian, that there was a “blanket trespass” at the building, and he was not authorized to be on the property, according to the affidavit.

“The defendent was also advised that he was to walk off the property and was not to return at any time or he was subject to arrest,” the deputy said.

A few minutes later, Yaddow was seen again on the property and began to walk away when the deputy spotted him.

The deputy pulled out a taser, and Yaddow stopped and complied.

Yaddow, 32, was arrested and charged with trespassing. He was transported to the Indian River County Jail, where bond was set at $500.

The old Eckerd building closed about 15 years ago and has been vacant ever since. CVS Pharmacy now owns the building after it acquired Eckerd but never re-opened it for business.

The Eckerd building closed not long after it opened. It’s been sitting empty for approximately 15 years.

Sebastian Inlet Bridge to be Replaced Amid Structural Deficiency