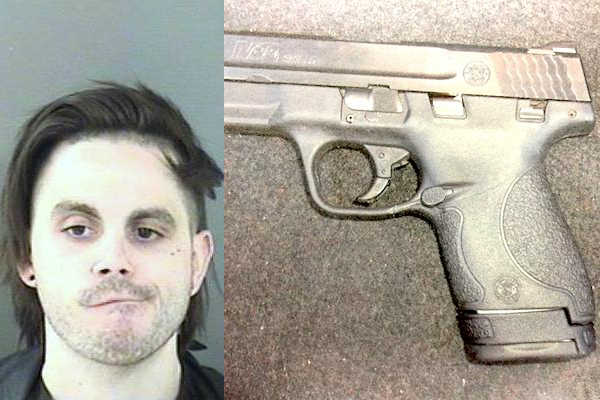 On Thursday evening at approximately 6:10 p.m., multiple officers with the Fellsmere Police Department responded to the entrance of the car wash in the 12800 block of CR-512 to investigate the report of a motorist brandishing a firearm during an alleged “road rage incident.”

As a result of the investigation, officers in Fellsmere determined that probable cause existed to arrest Ryan Michael Holt of Palm Bay for aggravated assault with a deadly weapon and battery.

Tensions between Holt and the victim began when a dispute occurred over who had the right of way on CR-512 where two lanes merge into one just west of I-95.

The dispute resulted in the mutual display of middle fingers that led to a verbal confrontation outside of their vehicles at the entrance to the car wash.

The victim said Holt approached him and, referring to a gun in his waistband said: “you want some [expletive].” Holt then allegedly pushed the victim prompting the victim to push back.

According to the victim, Holt then grabbed him by the neck with one hand and pointed a pistol at his head with the other hand.

The victim said he feared for his life, so he tried to disarm Holt. The gun ended up falling to the ground prompting both passengers (Holts and the victim’s) to try and pick it up before the other could. The victim’s passenger got it first and secured it in his pocket.

While Holt and his passengers’ account portrayed the victim as being the aggressor and said the gun fell from Holt’s holster, two other motorists who called 911 and stopped to witness the incident verified the victim’s account that Holt pushed the victim and pointed a gun at him.

Holt was arrested and transported to the Indian River County Jail without incident.

The firearm used was recovered as evidence and identified as a Smith and Wesson “Shield” 9mm with an eight-round magazine. The magazine was full, and a ninth round was chambered.

Holt has a concealed carry permit.

This is an ongoing investigation. The Fellsmere Police Department is seeking information from any additional witnesses who saw what transpired between Holt and the victim on CR 512 between I-95 and the car wash and in front of the car wash itself.