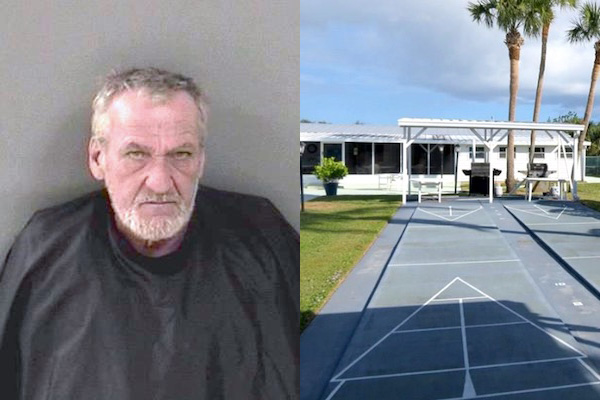 SEBASTIAN – Deputies from the Indian River County Sheriff’s Office responded to a call about shots being fired near the Breezy Village Mobile Home Park in Sebastian.

A witness told deputies that a neighbor was firing off a loud shotgun. There were multiple shots heard in the area.

Police met with Ricky Butler, 58, who said he went into the woods behind his residence “near the train tracks to shoot his new rifle,” the report said. Butler said he was shooting at an oak tree with his dog.

There were three rounds shot from the 30-30 rifle. Butler admitted he was a convicted felon.

However, he said he “wrote a letter to the governor and had his civil rights re-instated,” the police report said. Butler showed the letter to deputies.

Several witnesses were at the shuffleboard courts when they heard the shots. Soon after, other residents came out of their homes to find out what the noise was.

Butler was seen shooting the rifle. As he returned to his home, he told neighbors he was just looking for his dog.

Butler was arrested and transported to the Indian River County Jail where he was charged with possession of a firearm by a convicted felon, and discharging a firearm in public. Bond set at $10,500.