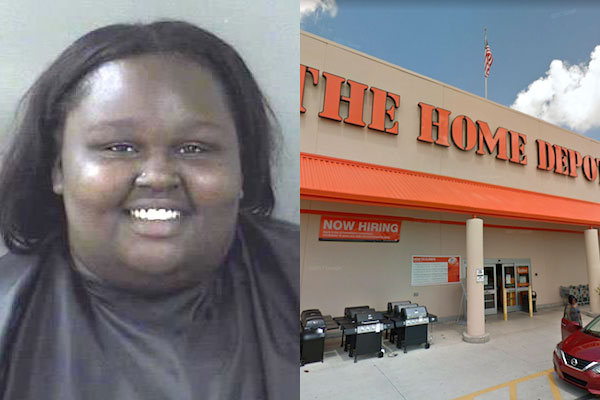 A 25-year-old woman was arrested after loss prevention found out she was giving away free tools to people at Home Depot in Vero Beach, according to the Indian River County Sheriff’s Office.

Ty’keyah LA’Quisshia Marshall, who worked at Home Depot as a cashier, was observed on video surveillance giving out free merchandise to people she didn’t know, according to the report.

Marshall would ring people up at the cashier, then remove items from the purchase, and allow the customers to leave with free merchandise.

On one of the incidents, she allowed a man to walk out with fifteen items valued at $468.16.

“Marshall was working as a cashier at Home Depot and completed a transaction for an unknown black male. During the transaction, Marshall scanned sixteen items totaling $468.16. Marshall then removed fifteen items from the purchase with a total value of $459.19 which only required the male to pay for one item valued at $8.97,” the deputy said.

Marshall then allowed the male to leave Home Depot without paying for the fifteen items, the report said.

Deputies made contact with Marshall who advised that she did remove items from the men on several purchases. She said the men would always approach her and advise what tools they were going to pay for, and what items they wanted for free.

Marshall admitted that she would allow the men to leave the store with the tools without paying for them.

She was charged with two counts Felony Grand Theft, and two counts of Retail Theft. Bond set at $6,000.

Marshall was released on bond Monday and is scheduled to appear in court on June 27, 2018.