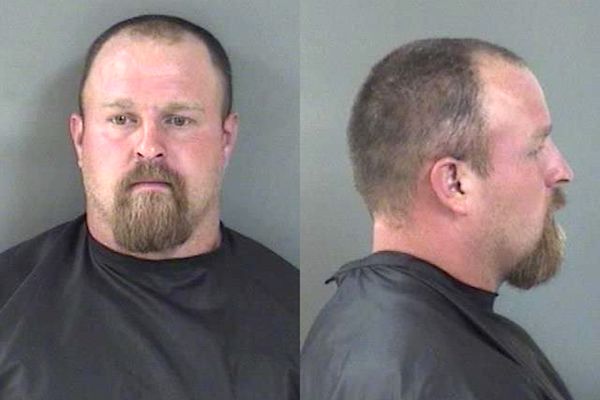 A 31-year-old man was arrested after he left the scene of an accident in Fellsmere after a physical altercation, according to the Indian River County Sheriff’s Office.

The victim called law enforcement on Sunday at around 4:30 p.m. to report an accident involving his vehicle and the defendant’s truck in Fellsmere.

“He stated that an argument ensued between himself and Michael [Ray Lesmeister]. The argument escalated to pushing and shoving by both parties,” the deputy said.

The victim states Michael Ray Lesmeister got into his vehicle and hit the bumper of his truck into the driver’s side door of the victim’s vehicle as he was driving away, the report said.

“Michael made no attempt to leave his information and fled the scene. [The victim] was able to locate Michael’s truck and then reported the incident,” the deputy stated.

A witness at the scene told deputies that Michael’s truck collided with the victim’s door before he fled the scene.

Deputies located a black Chevrolet truck that matched the description of the suspect’s vehicle, which was stopped at a stop sign facing north at the intersection of S. Oak Street and CR-512.

A traffic stop was initiated, and deputies made contact with Michael. Deputies found a scuff mark on the bumper of his truck, which was consistent with the area of where it hit the victim’s door, according to the report.

Michael denied knowing the victim or being the area of where the accident occurred.

“He explained that it must be a case of mistaken identity. He reiterated consistently that he did not have anything to do with the incident,” the deputy wrote in the report.

Michael was placed in handcuffs and became very upset with law enforcement because he did not feel he was being heard. He strongly felt he was being arrested for no reason.

“While escorting him back to my patrol vehicle, he became very angry and started to pull away from my control. He tried spinning his body around, all the while yelling profanities. It was clear he was upset with the outcome of the situation and was being uncooperative out of frustration,” the deputy said.

According to the report, Michael was forced into the back seat of the patrol vehicle through the use of joint manipulation techniques and striking with hands, arms and knees.

“Pain compliance was achieved, and Michael was secured into the back seat of my patrol vehicle,” said the deputy.

Michael was transported to the Indian River County Jail where he was charged with Misdemeanor Leave Scene of Accident w/Property Damage, and Misdemeanor Resist Arrest Without Violence.

According to jail records, the defendant has been arrested 8 times in Indian River County since 2005, and was convicted of a felony before that time in May 2003 for Burglary.

In 2009, Michael Ray Lesmeister was arrested on charges of Cruelty To Animals, Trespassing, Criminal Mischief, and Failure to Report a Traffic Crash with Property Damage (Case: 2009-00027064).

In 2011, the defendant was charged with Cocaine possession, drug paraphernalia, and three counts of possession of a firearm by a convicted felon (Case: 2011-00001838).