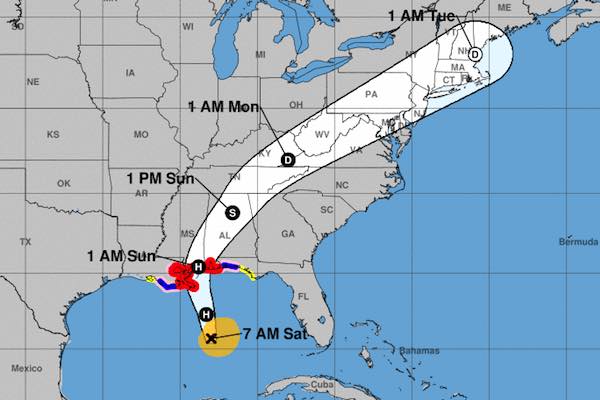 SEBASTIAN – Hurricane Nate is still gathering strength as spaghetti models show a track taking it near the coast of Lousiana and the Florida Panhandle, possibly moving eastward, but still too early to make predictions.

The latest spaghetti models from both the European and GFS models show Hurricane Nate could be moving slightly east of Lousiana and more towards Florida.

“A hurricane warning is in effect for portions of the northern Gulf Coast from Louisiana to Alabama, and preparations to protect life and property should be rushed to completion in these areas,” the National Hurricane Center said.

Nate is expected to bring heavy rainfall of 3 to 6 inches with isolated totals of 10 inches east of the Mississippi River as it makes landfall.

Forecasters say Hurricane Nate will probably become a Category 1 storm when it makes landfall. They don’t expect Nate to become a major hurricane.

There is no threat to Sebastian or Vero Beach from this storm, although it may bring rain.

If the current spaghetti models hold true, then the storm is expected to move slightly east of Lousiana.

The hurricane currently has winds of 85 mph and moving at 22 mph, and is about 240 miles from Mississippi.

The storm is expected to bring sustained winds of 90 mph and could make landfall around Plaquemines Parish in Louisiana, southeast of New Orleans. That’s near where Hurricane Katrina, which devastated New Orleans and the Mississippi Gulf Coast, made landfall in 2005.

Mandatory evacuations had been ordered in areas outside levees in New Orleans and Plaquemines Parish. A state of emergency has been declared in Louisiana ahead of Nate.

Forecasters say once Nate hits land, it’s going to be very quick to move out of the area and then weaken.