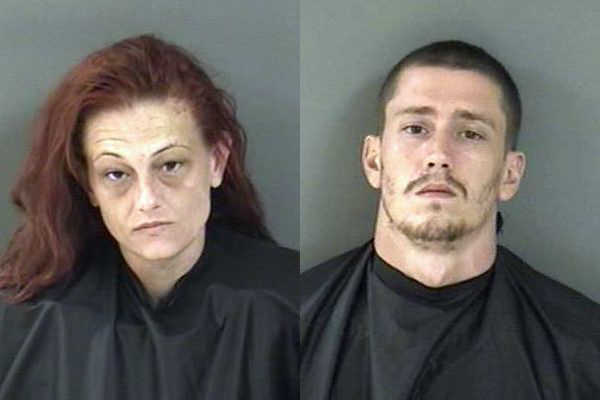 Summer Nichole Martin, 26, was charged with 3 counts of felony child neglect, 1 count of marijuana possession, and 1 count of drug paraphernalia in Vero Beach.

Deputies with the Indian River County Sheriff’s Office and a DCF investigator showed up at the home of Martin and Durrell to conduct a home-check and to evaluate the welfare of three children following a complaint.

Inside the home was drug paraphernalia in plain view, according to the report. Martin said she usually stores the contraband in a safe location and away from the children.

Durrell walked to the kitchen and began to prepare three bowls of cereal for his children.

“As Durrell prepared the cereal, I observed a bong in plain view on the kitchen counter within Durrell’s immediate reach. This bong appeared to have a small amount of burnt marijuana still in the bowl,” the deputy said, according to the report.

Durrell admitted that he smokes marijuana but not to the point that it impairs his ability to supervise his children. Durrell also told the investigator that he was aware of the presence of paraphernalia, but he believed it was out of the reach of the children.

The deputy witnessed the children walking around the kitchen, hanging from and climbing on the kitchen counter and stove. At this point, Martin took possession of the bong and relocated it to another part of the counter.

The bedroom where Durrell and Martin shared was messy, with no bedding on the mattress and the floors were covered in trash, the report said.

There was also another bong filled with water and a wax substance believed to be THC in plain view on top of a dresser. Also on the dresser were marijuana stems and a small white powder substance that later tested positive for cocaine.

The bedroom also had a litter box that was full and traces of cat feces on the floor.

The children’s room where a 2-year-old and 4-year-old stay in contained the top portion of a bong with some burnt marijuana.

The room where the 6-year-old stays in had several small mattresses lying directly on the floor. None of them had any bedding. The room was also messy.

Martin and Durrell were arrested and transported to the Indian River County Jail.

During transportation, Martin was able to remove one hand from her handcuffs and her shoelaces. She attempted to strangle herself with the shoelace, but the deputy was able to pull over and stop her.