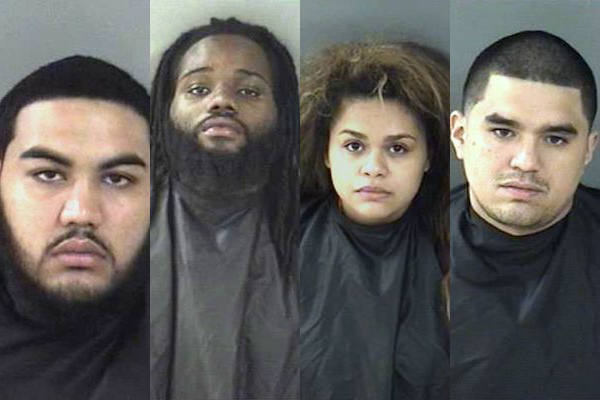 Deputies arrived at the Indian River Mall and located a vehicle that was described by employees at Dillard’s.

Four people were in a Volkswagen vehicle with bags of merchandise in the trunk. Deputies also found a semi-automatic .380 firearm in the glove compartment.

Three of the suspects declined to talk, but the female agreed to speak with a deputy.

According to the female suspect, they went to Dillard’s and other stores in the mall to pass the counterfeit $100 bills. They would make purchases and would return the items at a later date for cash.

She told deputies that they are all from the Ft. Lauderdale area and drove to Vero Beach to make the purchases.

All suspects told deputies they were homeless and that a man gave them the counterfeit bills to buy the merchandise.

They were arrested on multiple felony counts of passing the Counterfeit Bills and transported to the Indian River County Jail.