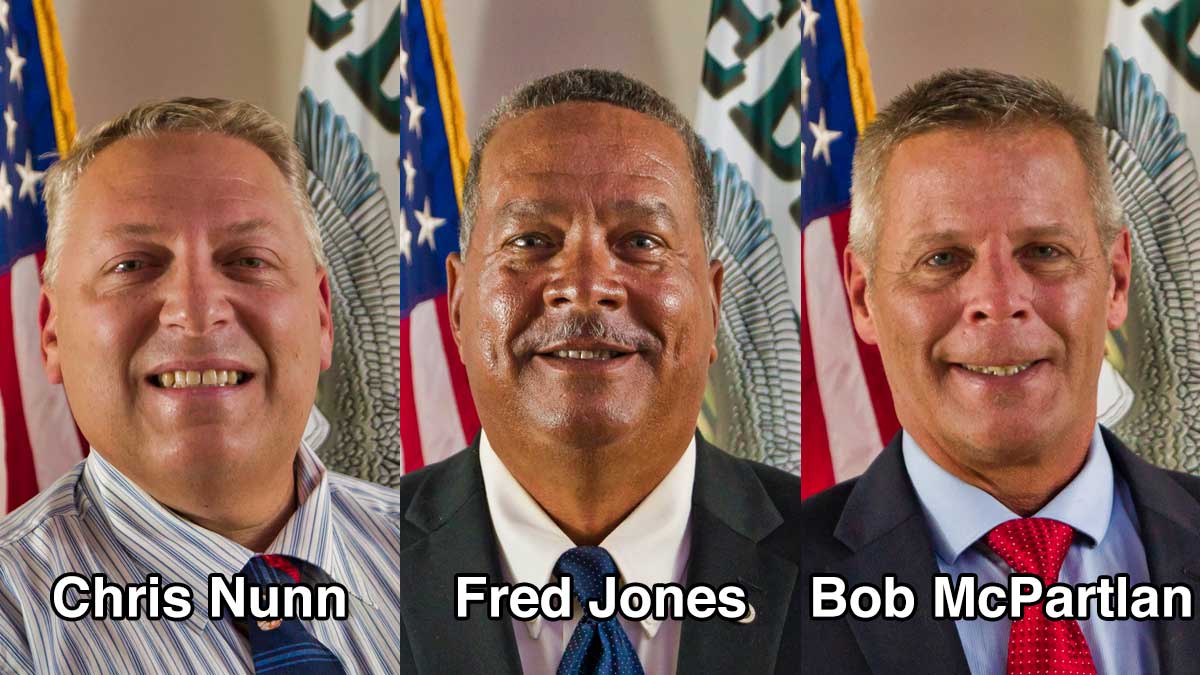 Below is a list of all candidates in alphabetical order starting with the last names. We also listed which candidates our editorial board and staff recommend for Sebastian City Council.

Damien Lee Fey Gilliams is a native Sebastian resident, living here for nearly 30 years. He graduated from Sebastian River High School with honors and went onto the University of Florida, where he received his computer engineering degree.

While Gilliams has lived in Sebastian all his life, we can’t find anything he has done for the community other than seeing him at a small fishing charity event a couple of months ago.

Gilliams hasn’t attended any City Council meetings but has stated that he hears his father talk about it all the time. He believes that his skills can help solve some of the challenges in the City.

However, it’s hard to take Gilliams seriously when he consumed several beers during our Sebastian Daily and Taxpayers Association of IRC forum last month as he answered our questions.

While Gilliams stated he was serious about this election, his actions speak differently. His opening statement shocked many in attendance as he held a beer up in the air and asked if everyone had a drink.

When a candidate runs for public office, especially at a forum, it should be treated as “a job interview.” The other issue was his lack of knowledge on how a City’s budget is spent and the facts about the Indian River Lagoon.

Gilliams mentioned that manatees were dying, and they are, but not in Sebastian. Manatees have been dying in north Brevard County near Titusville, and it’s more of a state problem than a municipality.

For those reasons, we did not recommend Damien Lee Fey Gilliams.

Fred Jones is a military veteran who retired after 30 years of service with the Florida Highway Patrol. Jones has previously served on the Charter Review Committee for Sebastian in 2015.

Jones’ motto is “Leading By Example,” and we, along with others, have seen him do just that. He has been very involved not only with the City but also the community. We have witnessed him at multiple trash pickups, charity functions, youth fundraisers, and community holiday celebrations.

Jones volunteers for many nonprofits to mentor local youth in Sebastian, including the Hart and Soul Foundation and the Exchange Club. In addition, we have seen him involved with the Junior Blue Water Open, a fishing day for kids in Sebastian.

Jones has been a resident of Sebastian for over 30 years. He and his wife Carrie have raised their two children here. He appears passionate about the environment and recently visited the Marine Resource Council to learn more about the Indian River Lagoon.

His primary focus is to fix Sebastian’s drainage issues in every neighborhood and get more people on the septic to sewer conversion to help the Indian River Lagoon.

He has attended multiple training seminars to learn more about municipal government to better himself as a City Council member.

We feel he is one of the best candidates and will do everything in his power to do what is best for Sebastian’s residents. We’ve seen it in action.

For these reasons, we recommend Fred Jones for Sebastian City Council.

Matthews also ran last year for Sebastian City Council during the Sebastian recall but was not elected. Since then, she’s been more involved with the City. She served on the Charter Review Committee and has attended quite a few city council meetings.

During her time at the IRCSO, she had an outstanding career, and all evaluations were above satisfactory. She also reported to the person who handled the budget for the agency.

But some of her statements about the City’s budget are raising eyebrows. Matthews mentioned the budget should be more transparent, but in reality, transparency is already present since it’s brought to the public for input and the Council to review and vote on it.

There are also budget hearings for the public to attend, which demonstrate total transparency. City business is always out in the open and done in the “Sunshine,” which is Florida law.

Matthews also believes in something called “smart spending” by not outsourcing. It sounds excellent when you listen to it, but it doesn’t always make sense realistically.

There are reasons why the City of Sebastian outsources by accepting bids on contracts instead of hiring in-house. In the long run, it’s cheaper for the taxpayers to outsource on specific projects than it is to pay additional salaries.

Matthews did bring up good points about the stormwater, being that the City has only patched problems with it since 1998. However, the City has already addressed every concern by creating a new Comprehensive Stormwater Management Plan. It’s a master plan like no other.

For these reasons, we did not recommend Sherrie Matthews.

A military veteran, Bob McPartlan, has been on the City Council for 9 out of the last 10 years and has previously been mayor. During the past 20 years, he’s worked for the Florida Department of Children and Families (DCF) as the Community Development Administrator.

McPartlan also sits on several nonprofits that oversee millions of dollars. He is currently trying to get a child’s trust in Sebastian and Indian River County.

McPartlan has been a great overseer for the taxpayers. For the last 7 out of 10 years, McPartlan has been on Council when the budget went to rollback or better. He also sat on the Charter Review Committee in 2010.

He’s got a lot of experience dealing with issues and is known to take phone calls late into the night to help resolve matters with residents.

Voters elected McPartlan as one of the three candidates during the recall election to help restore integrity with the Council. He’s been very active and can pretty much address any situation that comes before him.

Since experience matters right now to address the stormwater and other issues, we recommend Bob McPartlan.

A military veteran, Chris Nunn has served on the City Council after citizens voted for him during the recall election. Nunn has been a big help in restoring honesty in Sebastian.

While Nunn has been in the area for approximately 47 years, he’s lived in Sebastian for 25 years. Nunn and his wife Amber raised their children in Sebastian.

Nunn has been a mentor for local youth, been involved with the Boy Scouts for about 15 years, and served the community by participating in other youth organizations.

When it came time to help fix the City of Sebastian amid the political chaos brought on by Damien Gilliams, Pamela Parris, and Charlies Mauti, he played a large part in helping with the recall.

Nunn helped with the master plan to cover all issues from A to Z regarding stormwater and drainage issues and financing the project.

For these reasons, we recommend Chris Nunn.

Clint Phipps is relatively new to Sebastian after moving here from New York approximately three years ago. In New York, he owned an excavating company for 30 years.

Phipps said that he has experience with stormwater drainage and hopes to apply that experience with Sebastian. He also says that he saw a river up north that was contaminated with algae, similar to some of the problems with our Lagoon, caused by septic systems after a population explosion.

After he moved to Sebastian, he started seeing the same problems he witnessed in New York. He wants to help Sebastian by preventing the same fate that he saw up north.

Phipps mentioned that New Yorkers worked out their septic issues by having a new type of sewer system and septic tank. But, unfortunately, the new sewer system is very costly, and his idea to solve the problems may never work in Sebastian as it did up north.

Sebastian has tried for years to get people off septic tanks and has been a leader by providing grants to help residents convert to sewer. Also, septic tanks are prohibited in new developments in Sebastian.

In our opinion, Phipps should volunteer on some of the board committees in Sebastian to learn more about City business and spend more time in the community.

For these reasons, we did not recommend Clint Phipps.

It’s been a year of restoring integrity and honor after residents voted out three previous City Council members during an election recall.

Nunn, Jones, and McPartlan are highly respected. All three are military veterans. They have been honest and have set an example for City Council. A lot of work has been accomplished this year, but there’s still a lot ahead of us.

Since the recall, City business has moved forward with the help of Nunn, Jones, and McPartlan. They have tackled most of the drainage problems while helping to promote the health of the Indian River Lagoon.

All three incumbents voted to approve the Integrated Pest Management (IPM) plan, which promotes Best Practices with maintaining the parks and canals. In addition, the plan also serves as a transparent document to inform citizens how the parks, ditches, and canals are maintained.

The plan documents minimal spraying while using machinery to pull weeds, invasive plants, and weeds manually from our waterways.

There are still issues with our roadways in Sebastian. However, they are already being assessed for repairs by the City.

Ultimately, it’s up to the Sebastian voters to decide who they want on City Council. We encourage everyone to get out and vote to prevent what happened in 2019 when there was a low voter turnout. This election matters!

You can watch the Sebastian Daily and Taxpayers Association of IRC forum for more information about the candidates.

We feel Chris Nunn, Fred Jones, and Bob McPartlan are the best choices for the future of Sebastian.