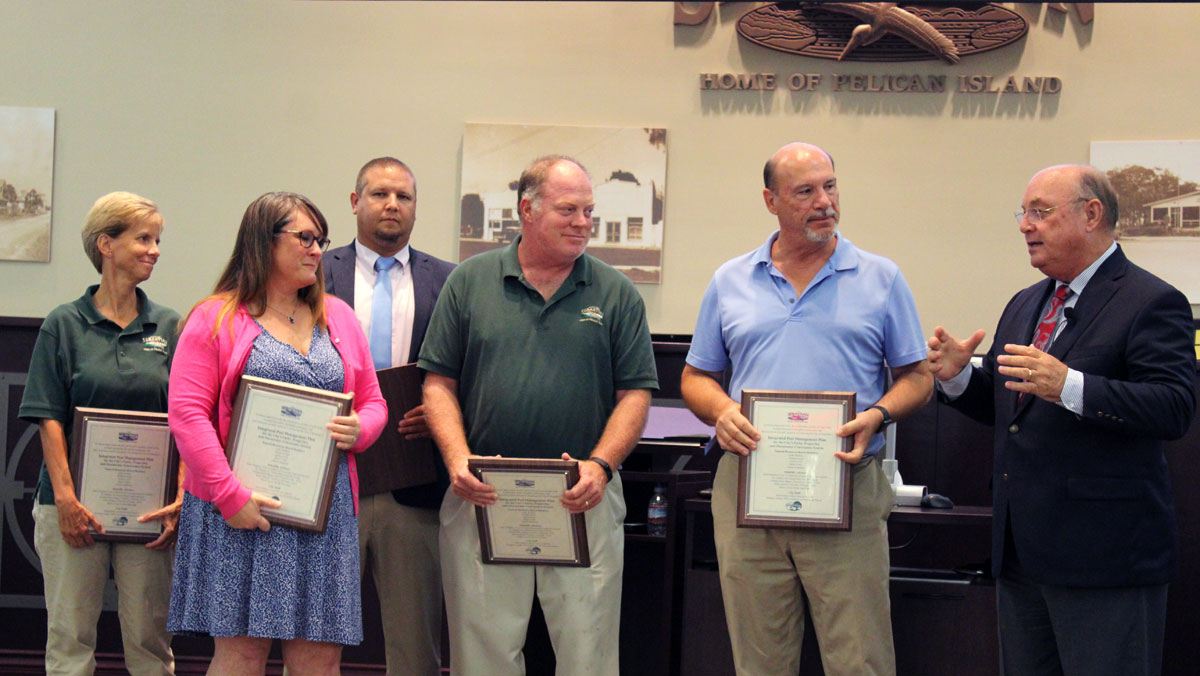 Sebastian Mayor Ed Dodd (far right) with some of the people who helped in creating the new IPM plan.

On Wednesday, the Sebastian City Council unanimously passed a new Integrated Pest Management (IPM) plan for its Stormwater Conveyance System. The project has been in the works since 2019.

The move is a win for the environment. Sebastian residents can read the entire IPM plan by clicking here.

The extensive IPM plan is so impressive that other municipalities have already contacted the Sebastian City Hall for information as they are hoping to adopt similar measures. It outlines best practices for handling invasive plants, manual harvesting to maintain canals and ditches.

“I was very excited to approve the IPM Stormwater Plan last night. It has been coming since 2019, when the idea was crafted. While the City has always followed the same procedures outlined in the plan, with mechanical and least toxic methods first, the plan gives a handbook of the entire process from beginning to end that can be followed. It includes logging and transparency into the City’s methods and chemicals used that can be seen by any person that requests it. There are already other cities adopting our IPM plan from around the country and using it to create a similar plan for their City. As always, the City of Sebastian is at the forefront of trying to help our environment, our Lagoon, and our Rivers,” Councilman Chris Nunn told Sebastian Daily.

“I’ve done some research, and I can’t find a whole lot of cities anywhere in the country, let alone Florida, who have these documents,” Dodd said.

Dodd also said from a best practices perspective, the plan would allow the City to adopt best practices by using the best agents that will cause the least harm to the environment.

According to Dodd, most cities talk about creating a similar plan, but nothing ever gets as far as the City’s current IPM plan.

“It’s important for the public to be made aware of all the things we go through on a daily basis in order to maintain the canals, the roads, and the parks,” Vice-Mayor Jim Hill said.

Hill added the IPM plan is a “very educational document” that explains the process of maintaining the canals and ditches.

Councilman Fred Jones, who has watched every single IPM meeting leading up to the completed plan, said a lot of work went into it before making it official. He thanked Brian Benton, Kimberly Haigler, and everyone else who helped with the plan.

Councilman Bob McPartlan says he’s waiting to see if anybody is against the completed IPM plan.

“Sebastian has always led the way as far as the environment. I’m just waiting to hear if there’s anybody against the plan that they’ve worked so hard at,” McPartlan said.

The City has utilized Best Management Practices for many years, but now Sebastian has a document to inform citizens on how it’s done.

During the meeting last night, Dr. Graham Cox, who also helped with the IPM plan, claims that Bayer, the maker of Roundup, will be banning the product from American store shelves because of glyphosate.

However, that’s not what Bayer said. Roundup is still used in agriculture and will not be going away anytime soon.

Bayer will be removing Roundup from box stores like Home Depot and Walmart, but it will still be readily available at other stores such as the Tractor Supply Company.

The controversy over glyphosate, the key ingredient found in Roundup, is still up for debate on whether it causes cancer. Bayer did lose a few lawsuits but maintains that glyphosate is not carcinogenic.

The U.S. Environmental Protection Agency (EPA), which has done many studies, says glyphosate does not cause cancer. The agency says, “there are no risks to public health when glyphosate is used in accordance with its current label.”

Bayer and the EPA say it’s safe to use when used as directed—using anything more than instructed is not recommended.

City of Sebastian is Leading The Way

Sebastian has done more to protect and promote the health of the Indian River Lagoon than any other municipality in the county. The City has been years ahead in helping the environment.

When a resident questions how the canals and parks are maintained, the City has the IPM information online to share with them.