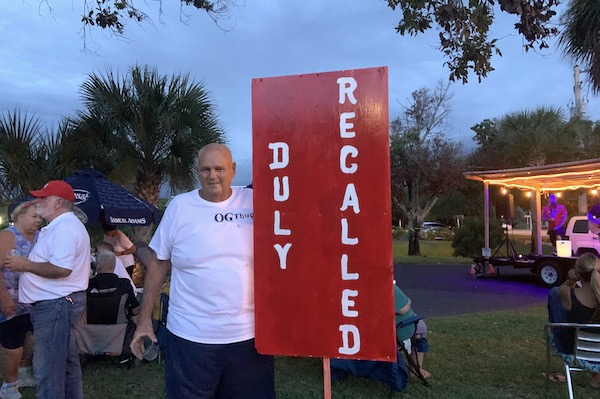 The recall in Sebastian made history Tuesday night in the State of Florida after three City Council members and replacing them with three new ones who ran on the recall ballot.

Damien Gilliams, Pamela Parris, and Charles Mauti have been removed from office. The election results will be certified on Sept. 17.

Parris has yet to take accountability for her actions. Local residents say she’s playing the victim again on her Facebook page.

“I believe I have served my city to the best of my ability against all odds, false press, and criticism,” she wrote on Facebook.

Gilliams still says the recall was illegal, even though an Indian River County judge found no such evidence and dismissed his lawsuit.

“I don’t think it was done legally, and that’s why I’m taking them to court,” Gilliams told CBS 12 News while acknowledging that the judge could decide not to step in. “Its probably game over if they don’t allow me to proceed and be heard,” Gilliams added.

“They broke the trust of a lot of people and the law when they attempted to take over our city and not give any of us a say in the matter,” Cole stated.

Moreover, Gilliam and Parris also face perjury charges after lying to investigators about the meeting.

During the meeting, the three tried to fire city staff, remove Ed Dodd as mayor, and appoint Gilliams as the new mayor.

The recall was all about what Sebastian citizens wanted, and they didn’t feel the three represented them in the city.

Gilliams and Parris are being labeled the worst City Council members ever to serve Sebastian.

We will have interviews with the three new City Council members this week.