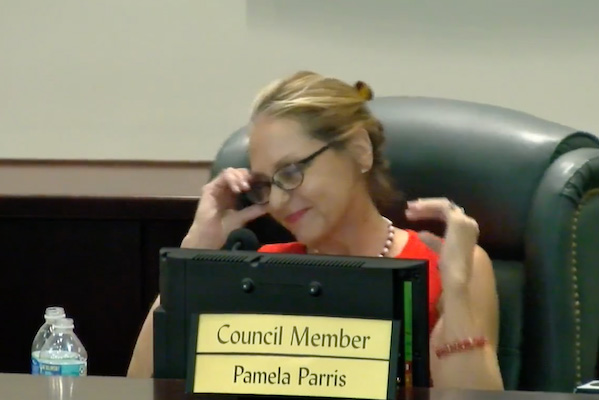 Pamela Parris still insists that someone hacked her Facebook account and wrote the controversial post. However, she has not contacted police to report the hack. She is now “contacting attorneys” to go after the press, calling them “evil trash tabloids.”

Last week, she denied posting any of the comments on her Facebook account. When a resident confronted her during the City Council meeting, she denied it on record and stated that a Hometown News reporter asked her to sue Sebastian Daily. We called the reporter and he was shocked that Parris made that allegation. The reporter claims he never told Parris to sue, and that she’s lying.

Parris also used the term “Yankee pickle” in the video to smokescreen what she actually said. It was her way to bring confusion. She lied through the entire statement in the video.

In three separate interviews with other press, Parris denied writing the post, but then told WPTV Channel 5 that she wrote it but didn’t mean to insult anyone. Parris then told TCPalm on Friday that her Facebook account was hacked. Parris said she was getting IT specialists involved to “investigate.”

Here are some of those letters from the weekend.

I think Pamela should do the right thing and step down from our city council. Oh, what a tangled web we weave when first we practice to deceive.

She cannot get out of saying these statements without a bunch of lies. Nobody will take her seriously from this moment on.

She destroyed her chance of ever having us believe her or listen to any advice or plans she may offer for this beautiful town. I seriously cannot understand why she would want to live in this friendly town that still has a sense of community.

Please step down for the good of Sebastian!

I cannot believe that the council member is so arrogant as to think the residents and visitors to our wonderful city are so stupid that she thinks denying what she plainly stated on social media is going to convince anyone to believe her.

She needs to resign and should be ashamed of herself.

I vote for the immediate removal of councilwoman Pamela Parris.
She has shown herself to be unfit for the position and as a public servant.

Where do we go from here?

Can’t believe those three got in. No way did you hack that lady’s Facebook.

You do an honest job all the time.

I am angry that Damian and his partner in crime Pamela, handled this police officer incident this way.

I want to thank you for staying on top of some alleged disturbing actions by some Sebastian City Council members. Please continue to stay on top of all this.

Please make sure that your reporting is also picked up by other sources of news (such as the Press Journal and local TV news stations) so that all residents (temporary and permanent ones) become aware of what is going on so that in our next City Council elections cycle, we all are well-informed before voting for qualified candidates.

Thank you Sebastian Daily for letting me know about this sad state of affairs.

I have been a frequent visitor of the beautiful City of Sebastian for the past 30 years. By the grace of God, I was finally able to move here a year ago. My new home is currently under construction.

Sebastian Daily has been my go to point for local information. I have always found Andy Hodges and his team of reporters to be honorable, impartial, fair-minded and accurately truthful.

Although I was very insulted by the initial reporting of Pamela Parris’s ignorant comments related to local use of herbicides, never have I ever written a letter to the editor of anything. However, after reading today’s newsletter, I cannot sit idly by and not add my voice those of the publicly outraged.

Ms. Parris is clearly the wrong person for this job or any public servant position that impacts the residents of Sebastian. We need a mature, professional and tactful role model representing the interests of our community at large; someone who will portray our citizenry in a positive manner.

D. Vispone
Florida resident since 1981
former Connecticut Yankee and proud of it

As a former resident of Sebastian I have followed the coverage of Ms. Parris’ rant against us carpetbagging Yankees (without whose filthy winter dollars the off season economy in Sebastian would suffer tremendously) and also her body shaming slurs against people she seems to think are out of shape, many of whom are likely her own constituents.

I see she has not changed from the judgmental, uninformed loose cannon I knew her to be. It would be unfortunate indeed for the community if she were to retain her council seat. Sebastian is a small town that does not need a small-minded person representing it.

Get rid of her. She is not what we need here in Sebastian!!!

GET HER A JOB IN ALASKA!

I wonder how the residents of Sebastian would refer to “most” of the current city council members if a new sign were to be made? Perhaps someone will “hack” the existing sign in the photo above and create a new one with more appropriate descriptions?

“A city where social media pages are hacked, hijacked and fabricated”

Maybe a contest out of it and proceeds can go to the Sebastian Police Department to purchase a new lie detector! Maybe you can be the first to prove that you didn’t hack the FB account.

I have lived in Florida since I was 20 years old (40 years now). My husband and I moved to the Sebastian area 4 years ago, and we absolutely love being here. The people are so much friendlier, and county workers are amazingly accommodating.

However, I must take exception to the statements made by Ms. Parris. To be so arrogant as to think the people of Sebastian would believe her claim when she plainly stated her views on social media is absurd.

I have to agree with another resident’s letter that she sounds very much like other corrupt politicians in office. I don’t think she deserves to stay on the City Council and I will vote to remove her if she doesn’t step down.

As to calling our seasonal visitors “carpetbaggers” is absolutely unacceptable. We may deal with more traffic in this area during the winter months, but it is those seasonal residents who help maintain our economy.

I am ashamed to have Ms. Parris on our City Council, and she should be ashamed of herself for her extremely negative views towards the people of Sebastian. She cannot possibly hope to represent our community any longer.

Am I the only one who sees the similarities in this city council’s actions and what is going on in the current White House. Flat out blatant lies , in the face of actual reality, and a disregard for the law.

My guess is these people see that it’s ok for the president to lie and then be above the law so why shouldn’t they?

Welcome to the new norm. I hope you all continue to report the truth in news.

It very upsetting to hear how the new appointed members handled that reinstatment. With no consideration for our local officers.

I am glad to hear the chief of police speak up.

The residents of Sebastian need a council with better respect.