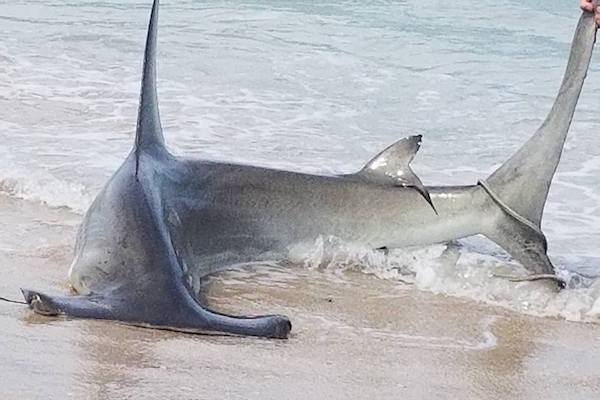 SEBASTIAN – The Sebastian Inlet is usually the place where people gather to catch fish, but one fisherman caught an 8-foot hammerhead shark just north at Bonsteel Beach.

A few staff members from Sebastian Daily had plans to visit the Sebastian Inlet, but decided to head farther north to Bonsteel. They met a fisherman who started to reel in something that appeared very large at the end of his line.

At that moment, we grabbed the camera and began a live broadcast from our Facebook page.

You can watch the entire video by clicking here.

Wade Senti of Melbourne can be seen on the video as he struggled for almost 35 minutes to bring the shark in.

“With Hammerheads you must release them quickly. We either get the hook out or cut the leader as soon as we get them,” Senti told Sebastian Daily. “We cut the leader at the hook and pulled [the shark] right back out. There is no time to waste. Thus why I was exhausted and actually threw up a little right after.”

Senti said he has a kit that any fisherman can get from the National Oceanic and Atmospheric Administration (NOAA) for tagging and release. Senti said he only catches and release, and his goal is to get the shark back out in the ocean as soon as possible.

“I use barbless hooks for easy removal, we cut the leader this time to get it back out faster. We would have tagged for NOAA, but we weren’t prepared,” he said.

Senti uses barbless circle hooks because it’s less harmful to the shark. At the end of the fishing line was a piece of Bonita.

“I had a Penn 12/0 with aftermarket parts for more power/drag, used 120 lb mono line, catch and release only,” Senti stated.

In the video, you can see Senti and a friend keeping the shark right in the water at the edge, which is where they like to release it back into the ocean.

Senti believes the Hammerhead shark was approximately 8 feet in length, possibly much longer, but there was no time to measure since they like to do the release quickly.

Sebastian Inlet is notorious for shark sightings and people have caught them off the pier at the State Park.

Another Panty Theft At Victoria’s Secret In Vero Beach

Another Panty Theft At Victoria's Secret In Vero Beach